Guest blogger Jan Hodges became interested in World War I combat art as a result of her involvement as a volunteer in a holdings maintenance project for the American Expeditionary Forces (AEF) documents at the National Archives at College Park. This article is part seven of the series about World War I Art and Artists. 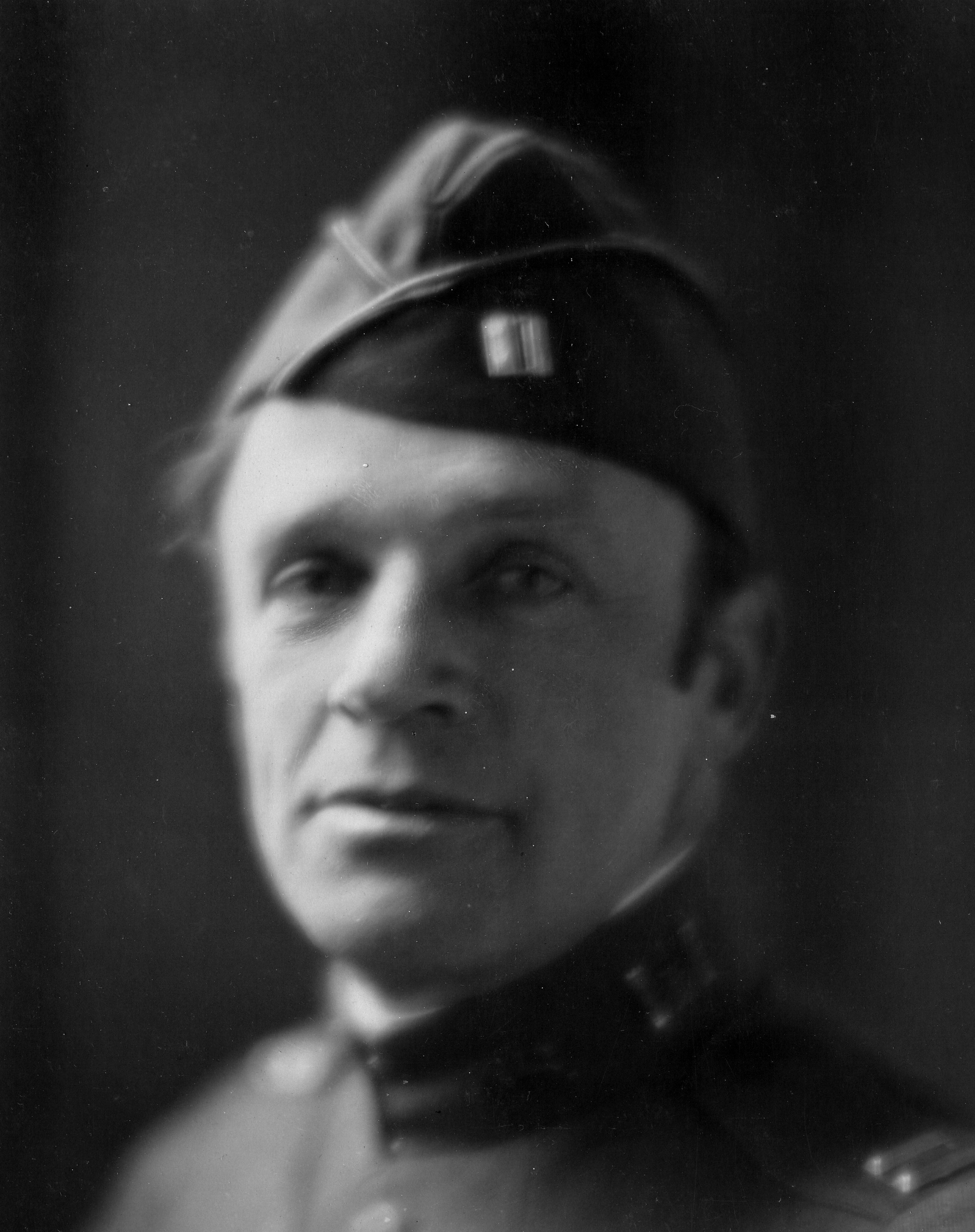 Captain Ernest Peixotto reported for duty as a combat artist in April 1918 at Neufchateau. A short, slightly-built man, Peixotto was forty-nine years old, well past the prime age for a combat soldier.  After meeting up with fellow artists Wallace Morgan and Andre Smith, the three men traveled to Fontainbleau and then to a small suburb of Paris called Samois-sur-Seine.

Samois-sur-Seine was not unknown to Peixotto; he and his wife Mary had a “studio home” there that they visited often. Mary had been living in New York City when Ernest left on a troopship bound for France.  By June, she had found the means to return to France and worked at a hospital close to their home in Samois-sur-Seine.  Her presence, while comforting, was also a source of stress for Captain Peixotto, who was concerned about her safety, but even, he went about the business of sketching the war 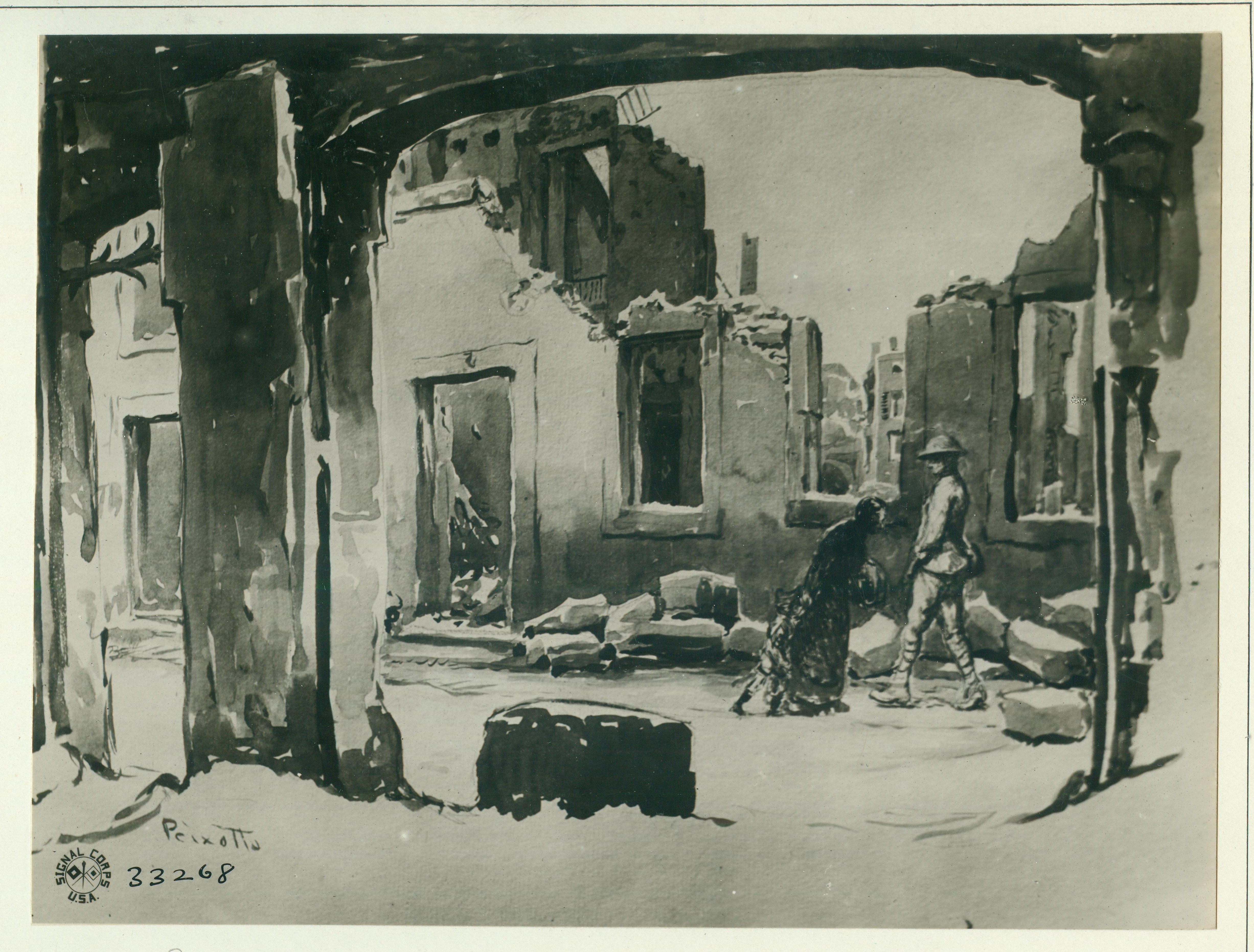 Peixotto often drew pictures of the ruin he saw around him.  Toward the end of April, he and Wallace Morgan went to Baccarat to sketch for a week. Peixotto captured the pathos of the civilian population in this drawing where a young vigorous American soldier passes the bowed, slow moving form of a French woman. 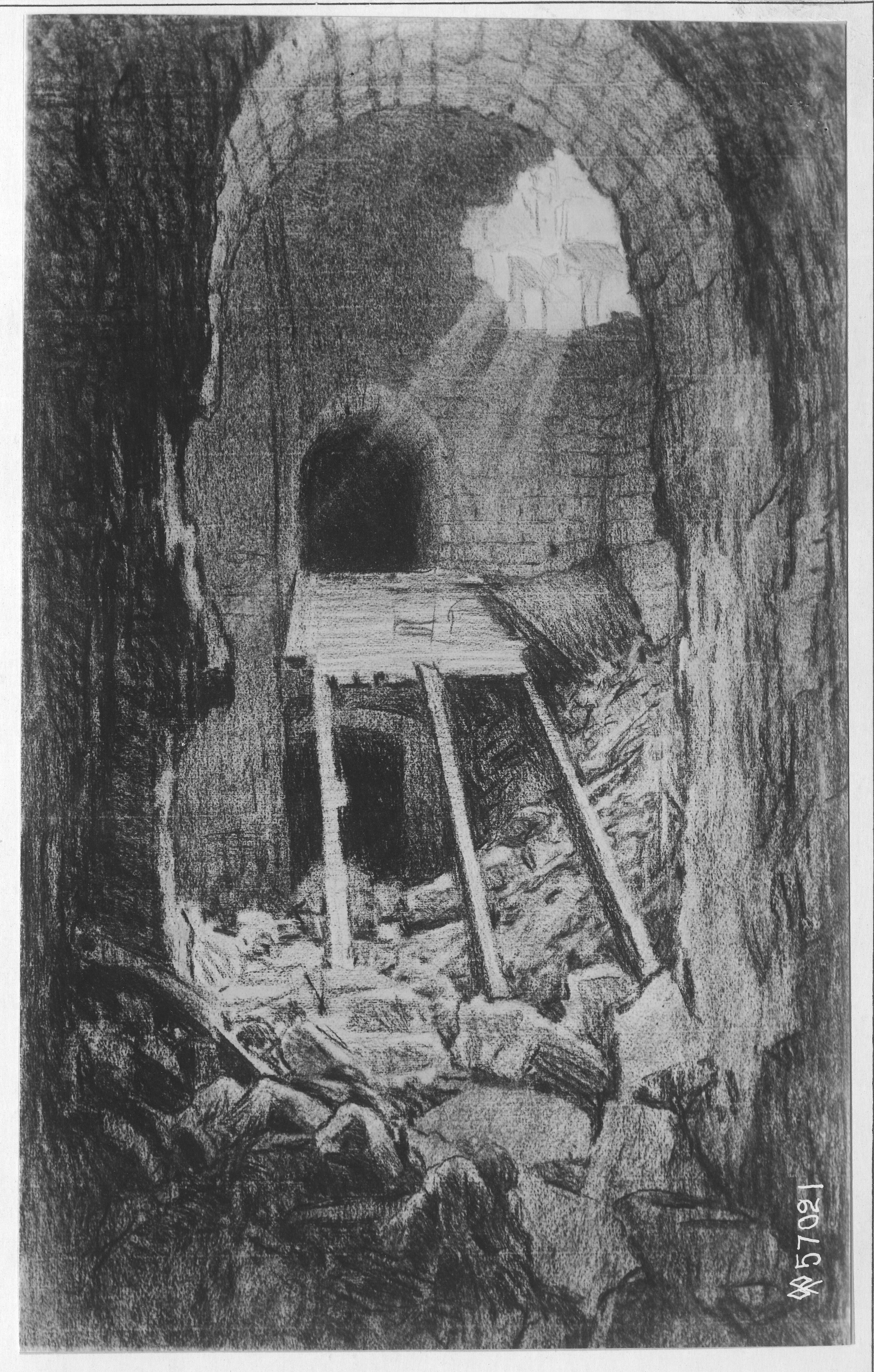 Local Identifier 111-SC-57021: Casemate, Camp Des Romains. The Camp des Romains forms the apex of St. Mihiel Salient and its fortresses were deemed impregnable. On the afternoon of September 12, 1918, it was bombarded and a great shell pierced the arch of this casemate, killing the commander’s orderly and three other German soldiers. It was evacuated that night. Official drawing by Captain Ernest Peixotto.

Captain Peixotto may have been slight of stature, but that didn’t make him a pushover.  On May 25th, during a visit to Soppe-le-Bas, he was accosted by an officer of the 32nd Division. In Peixotto’s own words, “I was addressed by the Lieutenant Colonel of the 126th Regiment.  He strongly citicized the policy of having captains attached to the A.E.F. as official artists.  I tried to convince him of the uses of this work, but he was offensively insistent on his own point of view stating that “that was no way to win the war.” I then told him that France and Great Britain had issued similar commissions and his reply was “that is why they are not winning the war.” Peixotto reported the exchange to his commanding officer who took the matter to a higher level and Lieutenant Colonel Waldo was chastened for his remarks. 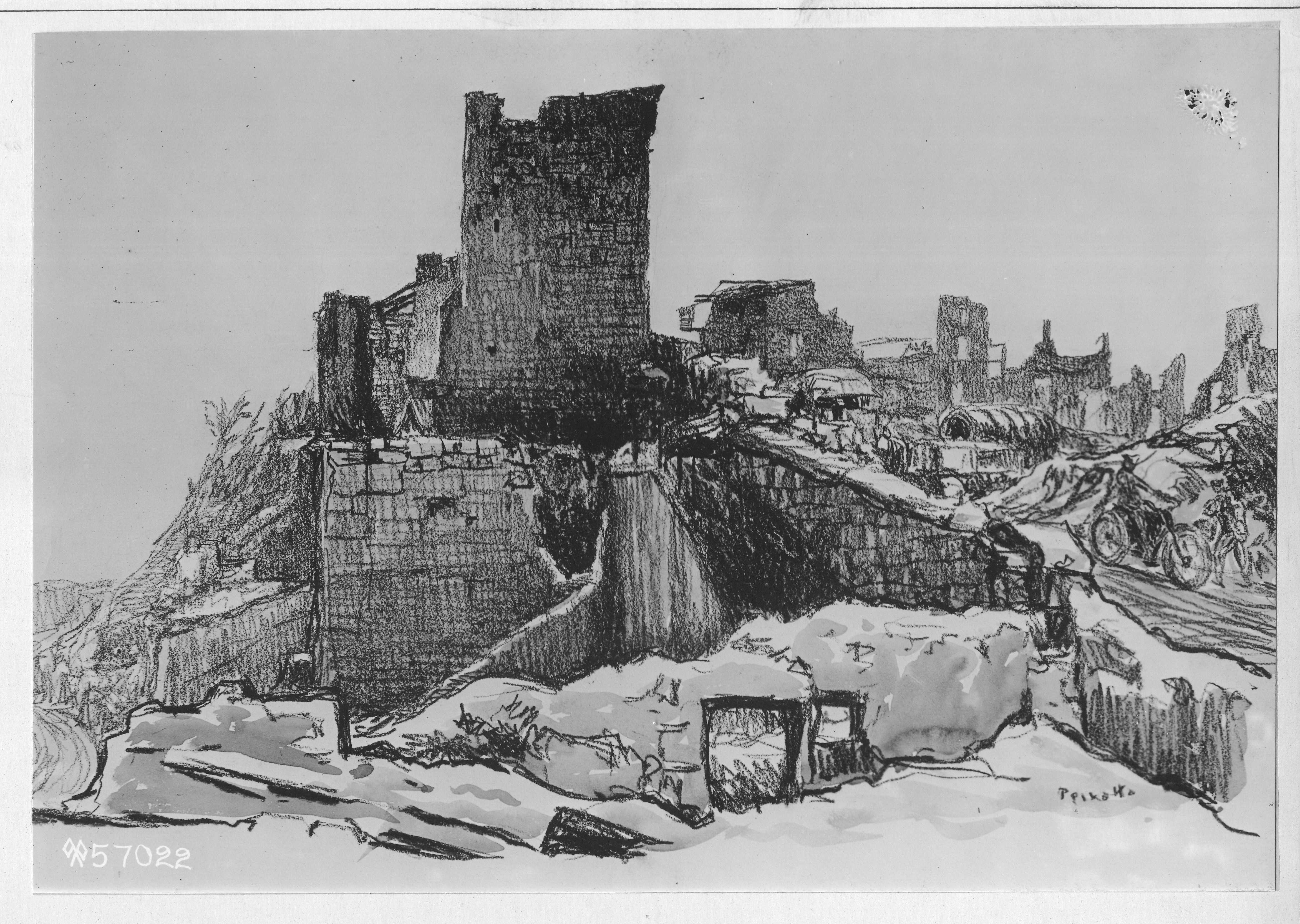 Local Identifier 111-SC-57022: Main Street, Varennes, just after the Americans took the town, which is interesting historically as the place where Louis XVI and Marie Antoinette were arrested during their flight from France.

The caption that Captain Peixotto wrote for this sketch shows his attention to history. It was at Varennes that the unfortunate Louis XVI and his wife Marie Antoinette were taken as they tried to flee from enraged mobs in Paris. 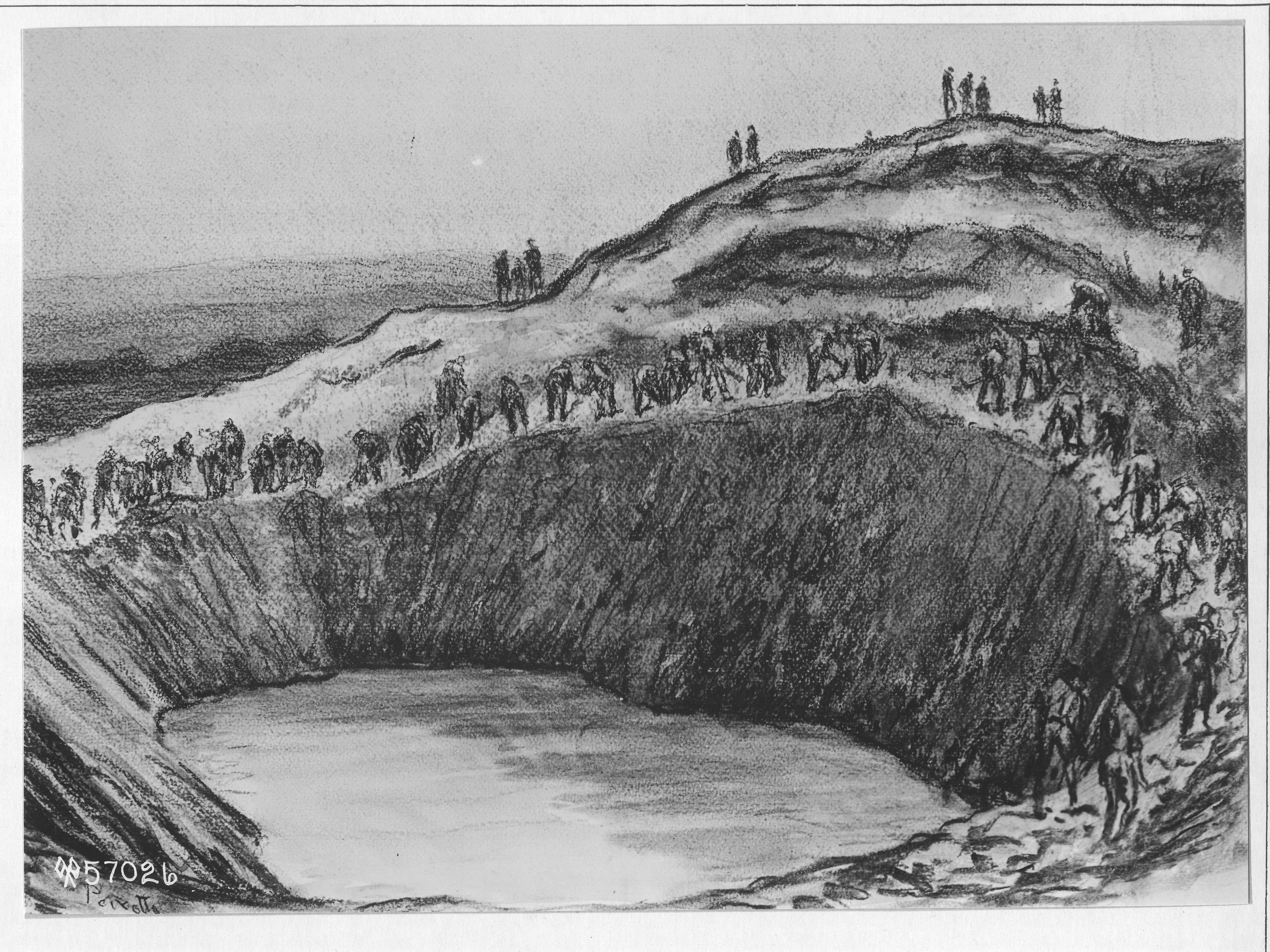 Local Identifier 111-SC-57026:  This great mine crater, 160 feet wide, was in the main street and American engineers are here seen lowering its top and filling it in preparatory to bridging it over.

During the war, both sides of the conflict employed men called “sappers” whose job it was to tunnel underground toward the trenches of the enemy.  Once they were underneath the trenches, they would plant explosives and detonate them. Evidence of the power of these explosions can still be seen at the Lochnagar Crater in France.

The next combat artist to be featured in this series is Andre Smith.

Krass, Peter. Portrait of War: The U. S. Army’s Combat Artists and the Doughboys Experience in World War I. John Wiley and Sons.  New York. 2006.