Previously the Still Pictures Branch introduced the initial blog in a four part series on various methods of researching World War II unit records. The first part of the series discussed methods of researching photographs of U.S. Army units during the war. This installment of the series will cover helpful techniques in U.S. Air Force unit research. Our hope is that this information is useful for the future projects of interested researchers.

As with any military unit research, historical knowledge of a U.S. Air Force unit is extremely valuable. The more we know about a unit, such as locations, personalities, decorations, types of aircraft/equipment or the unit’s place in the organizational hierarchy of the military, the more likely we are to find our photograph/s.

To illustrate our search techniques, we have chosen the 91st Bomber Group as an example. The 91st Bombardment Group, also known as “The Ragged Irregulars”, consisted of the 322nd, 323rd, 324th and 401st Bombardment Squadrons during the war.

The largest collection of Air Force photographs relating to WWII in the Still Pictures branch is 342-FH, Black and White and Color Photographs of U.S. Air Force and Predecessor Agencies Activities, Facilities and Personnel – World War II and Korean War, ca. 1940 – ca. 1980 . To begin our search within this series, we first consult the index/caption cards located in the Still Pictures research room in College Park, MD. If We consult the index/captions under the 91st Bombardment Group, we find many cards containing a variety of captions describing the relative photographs: 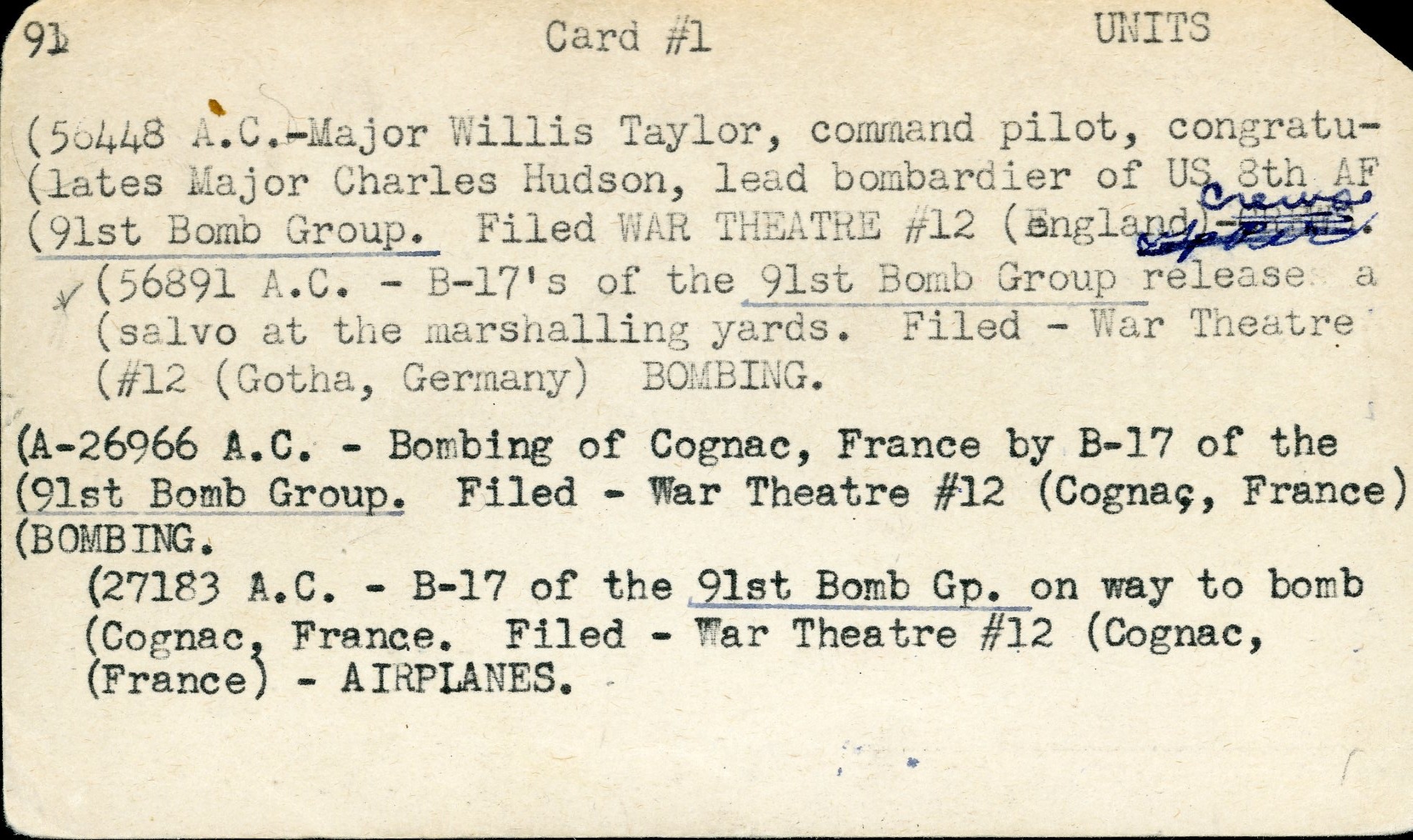 The index/caption cards provide us with the identifying information needed to retrieve the photograph. Note: Index cards will provide the original negative number (in this case – 56448 A.C.). Research room staff will then aid the researcher in converting the negative number into the corresponding print number (342-FH-3A-09111):

We know that the 91st Bombardment Group consisted of the 322nd, 323rd, 324th and 401st Bombardment Squadrons. So, we can also search under those specific units:

If we are interested in an individual member of the unit, we can search under their name:

If we know the locations of the unit during the war, then we can perform a search under the theater of war, country or city:

An interested researcher could even search under the subject “mascot” to find important photographs:

When researching military unit records its important to come prepared with as much knowledge about the subject as possible and to attack the research from many different angles. We shouldn’t rely solely on a search of the specific unit by unit name/number, but also by the personalities, locations, vehicles, triumphs and tragedies that give the military unit its historical character.

6 thoughts on “How to Research: Photographs Relating to WWII Air Force Units”