Sometimes when receiving permanent photographic records from federal agencies, we find surprises within the boxes. These can include photographic related items and non-photographic artifacts. For this post, I am highlighting just some of these items, but certainly not all found within our Still Picture Branch holdings.

One of our favorite non-photographic items are J. Edgar Hoover’s brass knuckles. The pair, along with photographs collected by Hoover, were transferred from the FBI in 1982. They were most likely maintained by his secretary and then put into storage after his death.  (https://catalog.archives.gov/id/141225374). 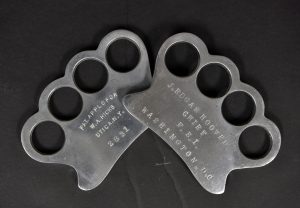 Next, we look at camera equipment. We have received all types, but nothing stands out more than these two Rapid Rectilinear lenses (Patent 1868), which were reportedly owned by Mathew Brady. The lenses were made by the J.H. Dallmeyer company of London, which was founded by John Henry Dallmeyer, the inventor of the Rapid Rectilinear lens. The lens on the left is 25 x 21 and the lens on the right, which includes a Packard-ideal shutter (Packard Shutter Company in California) and rubber bulb, is 15 x 12. 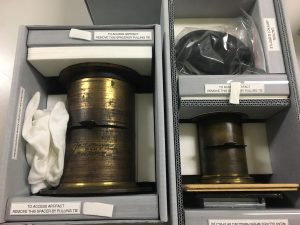 The following two pictures show storage boxes for glass-plate negatives and lantern slides. The first, for glass-plate negatives, was made by reusing wood from a crate that housed boxes of Grape-Nut Cereal.  The second picture includes two lantern slide boxes. Over the years, we have received tens of thousands of lantern slides and in many cases they were transferred in wooden storage boxes before rehousing into new archival boxes. Lantern slides in our collection are either positive images on glass or a film transparency placed between two pieces of glass. We also have hand-tinted lantern slides dating back to the latter half of the 19th century. 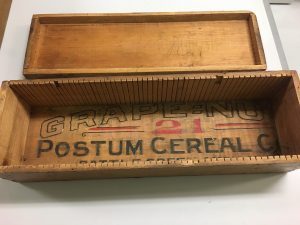 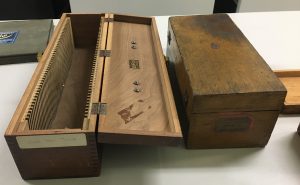 We now will look at three boxes that once held gelatin dry plates. The first is an early 20th century box that originally housed one dozen 5” x 7” inch dry plates manufactured by the Eastman Kodak Company. Seed Dry Plates were original produced by the M.A. Seed Dry Plate Company before being acquired by Kodak in 1902. The second box originally contained dry plates manufactured by the Hammer Dry Plate Company in St. Louis, Missouri. The company was founded by German immigrant Ludwig F. Hammer. The third box shown contained Wratten & Wainwright panchromatic dry plates. Wratten & Wainwright were an English photographic company founded by Frederick Charles Luther Wratten and Henry Wainwright. The company was acquired by Kodak in 1912. More information on gelatin dry plates can be found in the blog “19th Century Photographic Processes and Formats.” 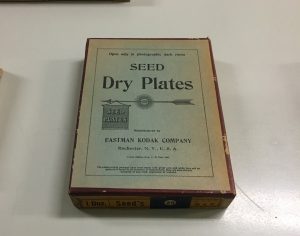 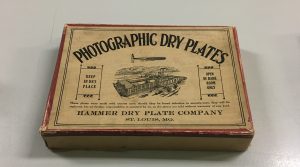 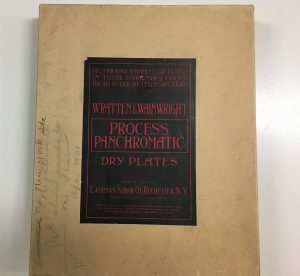 We move away from glass for the next one, with a film canister for a No. 10 Cirkut rotating camera. Cirkut cameras were used for panoramas and came in several models, with the model number representing the maximum film width the camera could accept. 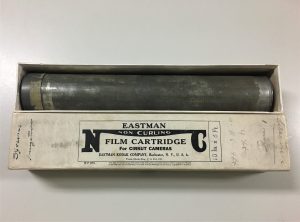 The next two boxes below housed photographic paper. The first was produced by Agfa-Ansco in Binghamton, New York. The Ansco Company merged with the German company Agfa in 1928. During WWII, the U.S. Government took control of Agfa-Ansco assets in the United States. The second box is an Agfa box for paper produced in Europe. 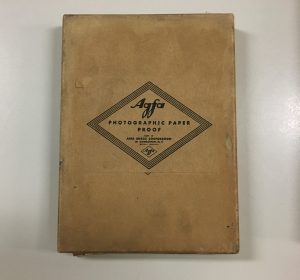 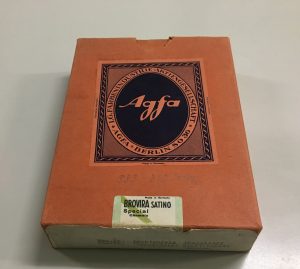 Lastly, we have even found never opened boxes of Kodachrome II film from the 1960s and 70s, which expired decades ago. Kodachrome is a color reversal film introduced by Eastman Kodak in 1935. The production of Kodachrome stopped in 2010. 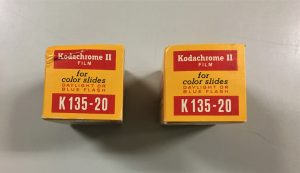