Today’s post is from Criss Kovac. Criss is the supervisor of the Motion Picture Preservation Lab, which is responsible for performing conservation and preservation work on motion picture records held across the National Archives. Recently, she completed a digital restoration of The March (306.765).

On August 10th, 1963 The U.S. Government, under the auspices of the United States Information Agency (USIA), tasked Hearst Metrotone News with crafting a documentary covering The March on Washington for Jobs and Freedom, the landmark civil rights event planned for the end of that month.  The agency tentatively titled the film that would become The March “The Time Is Now” and specified that it should be three reels (approximately 30 minutes) of 35mm black and white film.  As stated in the contract, the “specific objectives of the Picture are to portray the dramatic events of the August 28th Demonstration… as a living force in American democracy, and to present in depth… a responsible, Nationwide effort on the part of major civil rights organizations…. in order to arouse the conscience of a nation to the need of Congressional legislation on the civil rights issue.” 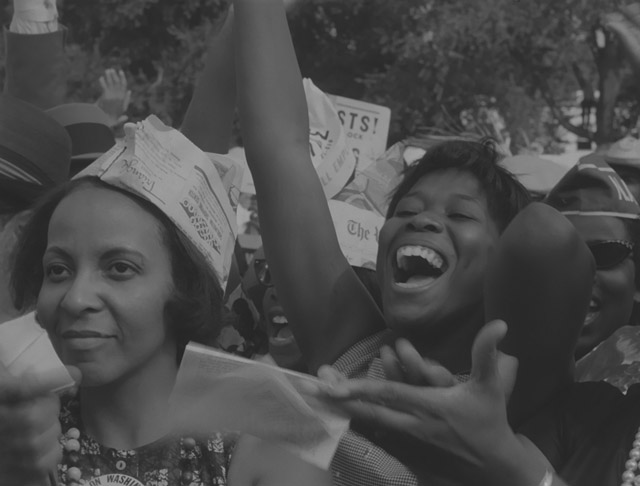 To undertake the direction of this momentous film, Hearst and the USIA enlisted James Blue, previously known for his critical success with Olive Trees of Justice (1962) and The School at Rincon Santo (1963).  The USIA required that the film of the March be made up entirely of original footage and that synchronized sound be used as little as possible to facilitate worldwide distribution in a variety of languages.  A rough cut was to be delivered on September 3rd, only six days after the event, with a final cut expected on September 5th.  The release prints would be rolling off the processors by December 3rd, 1963.  The USIA budgeted a total of $50,000 for the completed production.

With these requirements, James Blue went out with fourteen sound and cameramen split into seven teams.  They garnered footage from New York, San Francisco, Boston, Los Angeles, Seattle, Atlanta, Texas, Chicago, and Washington D.C.  Over the course of three days they shot 59,795 feet of film– more than 11 hours of material.  Ultimately, the footage was edited down to 3,021 feet and a runtime of 33 minutes.

James Blue personally undertook the task of going through all of the footage and edited the complete production as we see it today.  He wrote the script and narrated the English, French, and Spanish dialogue.  He created a visually stunning, moving, and arresting documentary of the hope, determination, and camaraderie embodied by the demonstration. All in all, the film came in under budget for a total of forty thousand dollars.

For something that seemed so straightforward, the controversy over The March was intense.  In the fall of 1963, Edward R. Murrow, head of the USIA, was battling cancer and had fallen out of favor with the Johnson administration in part because of his progressive views on civil rights issues.  It was during this time that Murrow, and George Stevens, Jr, chief of the USIA Motion Picture Service, were attempting to move The March into circulation.  Liberals protested that the film was too conservative and did not highlight the disparity between whites and blacks while conservatives argued that the film shouldn’t have been made at all.

Meanwhile, members of the USIA Advisory Committee sparred over the content, the release, the appointment of Carl Rowan as the new director of the USIA, and Rowan’s decision to move forward with distribution of the film.  Committee member Clark Mollenhoff said, “I was not against film clips of the march being distributed abroad because I think USIA should cover the news… But foreign audiences are not sophisticated and we should not advertise our problems.  We are not showing ‘Tobacco Road’ or ‘The Grapes of Wrath’ abroad and we should not have shown this.”  To temper these sorts of reactions, the film was reframed, through press releases and with an introduction to the film by Rowan that focused on the orderliness of The March and the constitutional right of assembly rather than the struggle for civil rights.

Telegrams flew between U.S. Embassies and the USIA as the film was being offered for release.  Several of the telegrams were critical of the film and of the predicted impact.  A telegram from the embassy in Amman Jordan reads, “Team believes “The March” with Rowan introduction excellent film but fails [to] provide sufficient background [on] U.S. civil rights problem for Jordanians who are uninterested [in] this issue.  Furthermore, in view [of the] absence [of the] passage [of] civil rights legislation, the demonstration feature in [the] film will appear to locals to have failed.”  Respondents at the USIA sent telegrams back to various embassies, such as this one to Moscow, reading, “Suggest you consider use of film The March in private showings in order [to] allay interpretation of Civil Rights issue as exclusively ‘negro or anti-negro.’  Film’s footage of substantial white participation in gigantic and orderly demonstration should help straighten record.”

Despite the political and social concerns about The March, its impact was immense, both at the time when shown to international audiences, and again when the film was permitted for release in the U.S.  In 1964 The March was screened at film festivals including the Venice Film Festival and the Tours Film Festival. The film won grand prizes at the Bilbao Film Festival and Cannes.  The Bilbao committee cited its decision to award the film first prize for “Contributing Most to Friendliness and Understanding Between Peoples,” and the Cannes Jury credited the film for its “concentrated rhythm which permitted clear interpretation of the way a powerful peaceful force was used to uphold a general desire for universal justice.”

The March continues to impact audiences today.  The footage is frequently used for academic research  and in television and film productions.  In addition, the National Archives has received numerous requests for public screenings of The March. In preserving and restoring the film, we are honored to be an ongoing component of the work that James Blue, Edward R. Murrow, and George Stevens Jr. began.

The National Archives is premiering the digital restoration of The March at the Archives building in Washington, D.C. at noon August 26th – 28th in the McGowan Theater. The restored version is also available for viewing online. Learn more about how we preserved and restored The March in our next post!

Added 8/22/2013: For information about other federal records relating to the 1963 March on Washington for Jobs and Freedom, see the National Archives’ Rediscovering Black History blog.

11 thoughts on “Making The March”