As soon as he was able, my Grandfather went to sea. Rodger Holmstrom grew up in Seattle and spent much of his time on boats, large and small, sailing on Puget Sound and the lakes. Instead of the traditional Boy Scouts, he joined the Sea Scouts. When he graduated from high school, the United States had recently entered World War II. On the eve of his eighteenth birthday, my grandfather boarded a train on his way to begin basic training with the Merchant Marine.

The United States Merchant Marine is made up of civilian-owned merchant vessels. During wartime these vessels may be called upon to serve as an auxiliary to the US Navy. During World War II, several thousand ships carried supplies around the world for the military. Merchant vessels were often slow and not heavily armed, and the casualty rate for merchant crew members was 1 in 26, one of the highest of all branches of service. Despite this, merchant mariners did not receive formal recognition of their veteran status until 1988.

As I write this post, I am traveling to Seattle to attend my grandfather’s memorial service. Over the last decade, I was fortunate to spend a lot of time with him. The stories he told about his wartime service are a part of our family lore and I’m sure many will be recounted this weekend.

During one of his visits to the East Coast, my grandfather joined me and my father for an afternoon cruise out of Baltimore on the Liberty ship S.S. John W. Brown. He had served as an Oiler on this class of ship and during the tour of the engine room he explained how it was part of his job to reach into the moving engine and feel the shaft for signs of overheating. He also showed us how the engine crew used to hide contraband alcohol from officers inside the engine itself.

One of his best stories involves a time he went ashore at Maffin Bay, New Guinea (now Indonesia) to visit an Army dentist. He came back to the beach to find that the entire fleet had been called away, stranding him there. Always resourceful, he managed to find shelter and transportation. He got ahold of an Army and a Navy uniform, and for meals, he put on one of the uniforms and stood in the mess line for that branch. It took him almost four weeks, but by following the mail he was able to locate his ship and rejoin it at Hollandia, about 100 miles away.

This story sounds almost too fantastic to be true, but during a visit to the National Archives and Records Administration in Seattle, archivist Patty McNamee helped my grandfather and me find the deck log of the S.S. Lindley M. Garrison, containing notations for both the beginning and the end of his adventure. 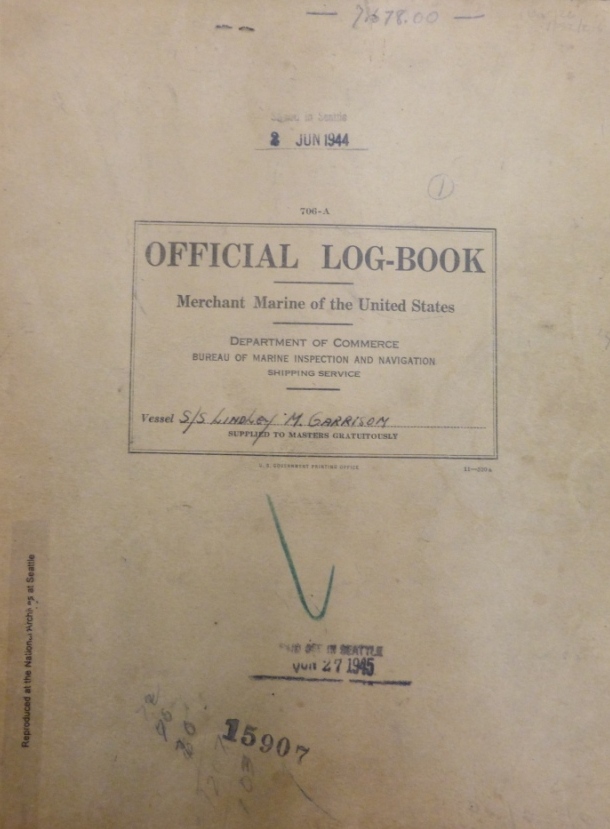 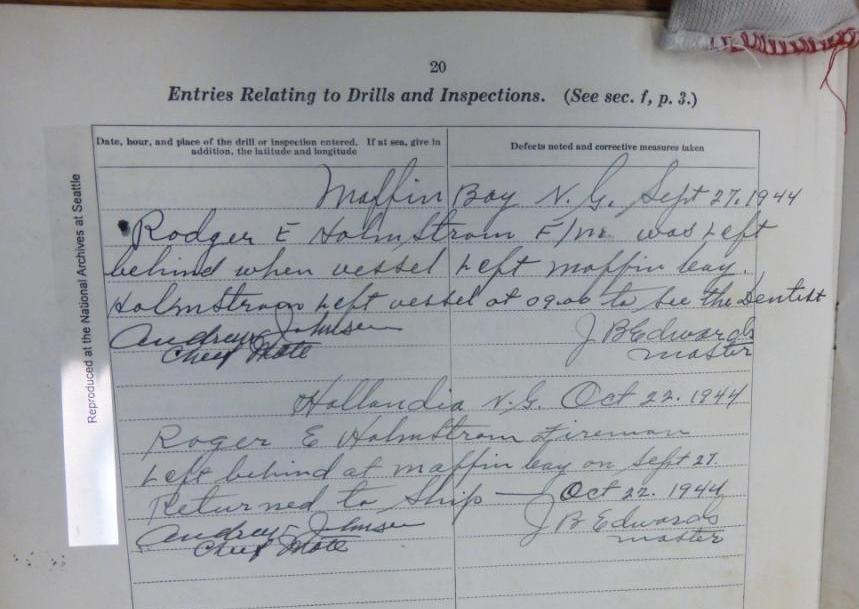 My grandfather was thrilled to see these records and took copies of several pages home to share with friends and family. He would frequently tell me how much fun he had when we visited the Archives together.

Not all Merchant Marine history is contained in logbooks. The National Archives and Records Administration also holds records in other formats, including ship blueprints, photographs, posters, and films.

In NARA’s Motion Picture Preservation Lab, we work to preserve and provide access to films created and collected by all parts of the Federal government. Last year, I had the opportunity to work on a World War II-era film from the United States Merchant Marine titled Hannibal Victory. Such films provide me with glimpses of what life was like for my grandfather and the other sailors responsible for delivering vital supplies to the front lines.

Hannibal Victory, produced by the US Maritime Commission in 1945, features a voyage of the Victory ship named for Mark Twain’s hometown of Hannibal, Missouri. The cargo includes eight locomotive engines bound for delivery to a railroad being built by the US Military in the Philippines. During the voyage the crew balances its routine of duty and leisure activities with periods of high alert as enemy vessels threaten the ship.

I’m grateful that the National Archives provides me with ways to build a connection with my grandfather’s life, both through films and textual records. My family history is enhanced by the documentary traces permanently preserved and available to researchers like me and you. It is an honor to come to work every day and help ensure that such records will remain accessible far into the future.

Hannibal Victory can be found in its entirety in three Record Groups at NARA. It is held under item numbers 178.53 (US Maritime Commission), 16.P.731-7A (Department of Agriculture), and 306.5138 (US Information Agency). The content for all three items is identical. 306.5138 has been digitized and is available on YouTube and on DVD in the Motion Picture, Sound, and Video Research Room at College Park.

What have you found at the Archives that adds to your family history? Have you used films to tell your family’s story?

5 thoughts on “My Grandfather Went to Sea: Finding Family Stories in Historical Records”