Guest blogger Jan Hodges became interested in World War I combat art as a result of her involvement as a volunteer in a holdings maintenance project for Record Group 120, American Expeditionary Forces (AEF) documents at the National Archives at College Park. This article is the last posting in the series about World War I Art and Artists. 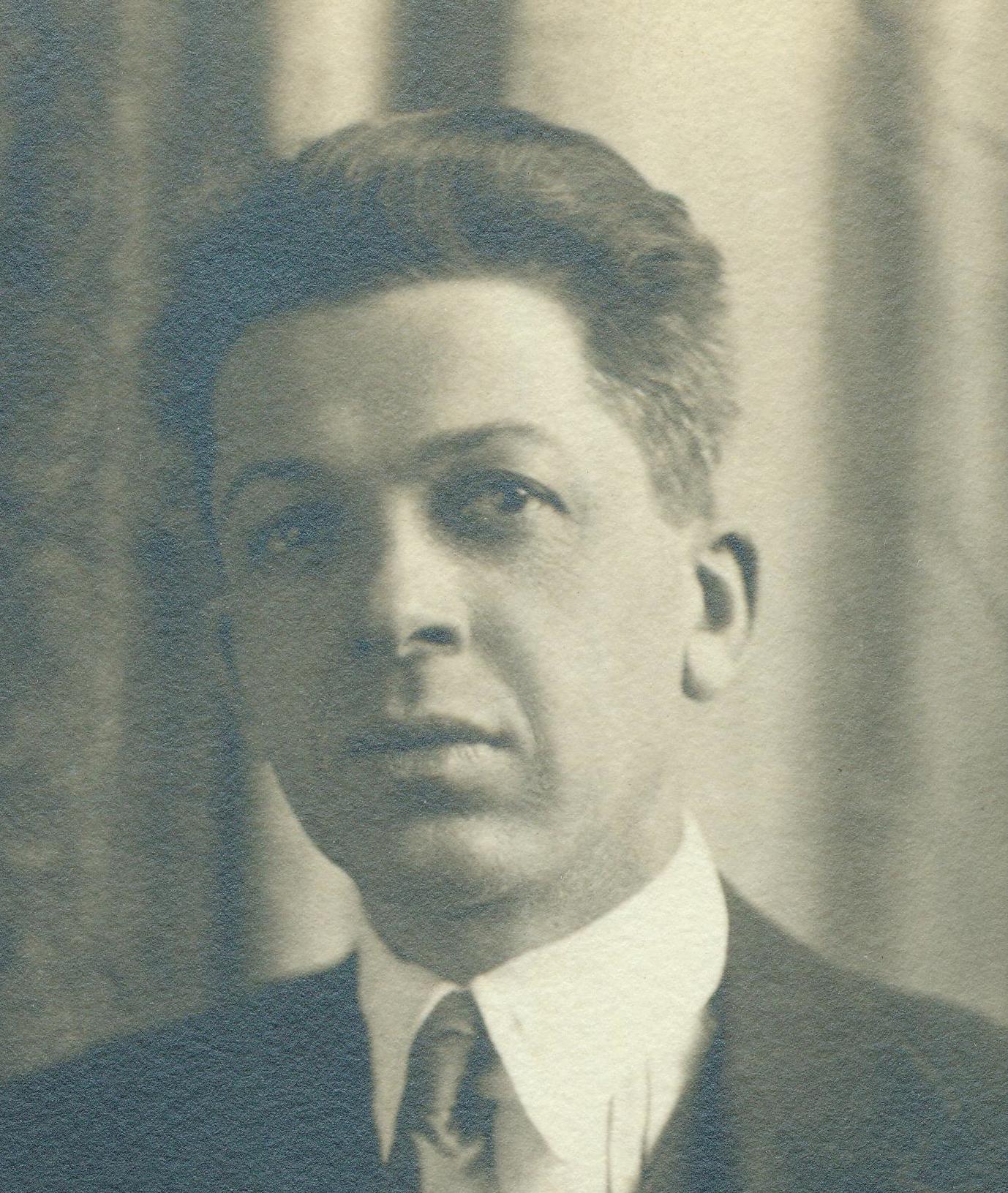 Harry Townsend was a prolific sketcher, turning out dozens of drawings.  So much so that it was difficult to identify a theme that would do him justice and wrap up this series of posts on combat art for World War I.  However, one of Townsend’s sketches contrasts greatly with his other work.  In this drawing, an aviator is depicted in cartoon form, almost a caricature.  In many of his sketches soldiers are fully realized as he captured them going about the tasks of war.  The Great War was a dividing line between old and new warfare; the old map of Europe and the new. The contrasts are notable. 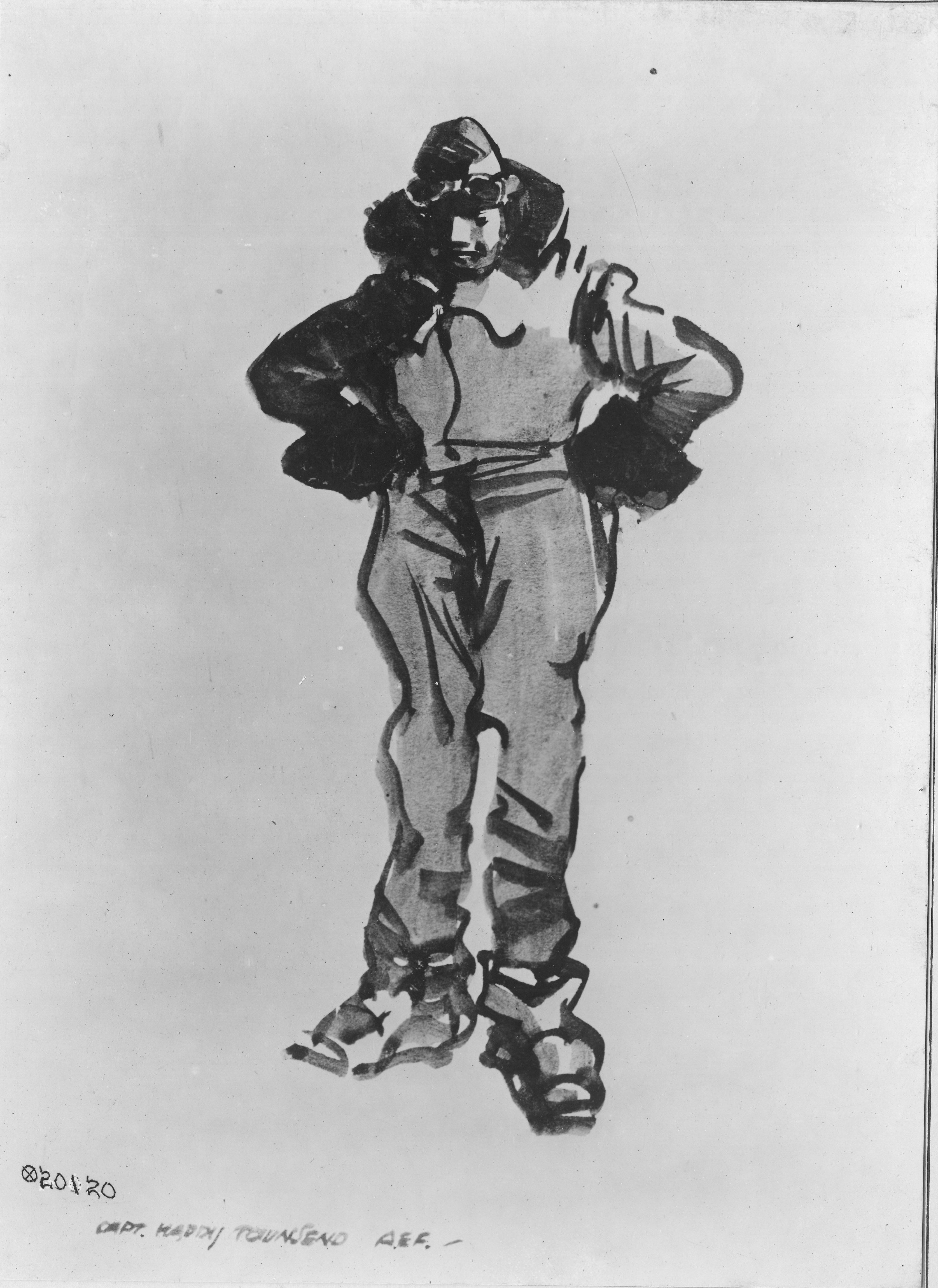 World War I was a catalyst for change, bringing change to war itself.  Chemical warfare in the form of poisonous gas was introduced in 1915; artillery capacity was increased; airplanes were used for reconnaissance and to drop bombs; the British developed and deployed tanks. The ability to manufacture weapons in the hundreds and ammunitions in the tens of thousands created war on an industrial scale.  It is almost impossible to comprehend the number of men who died, most from artillery barrages.  A jagged scar runs through the heart of France, along the lines of abandoned and forgotten trenches. On either side it is dotted with cemeteries and memorials. An entire generation of young men was lost.  Not all who survived were whole. Nervousness and shell shock were common afflictions.  Because there was no penicillin, many men lost either their lives or limbs to infection from battle wounds. 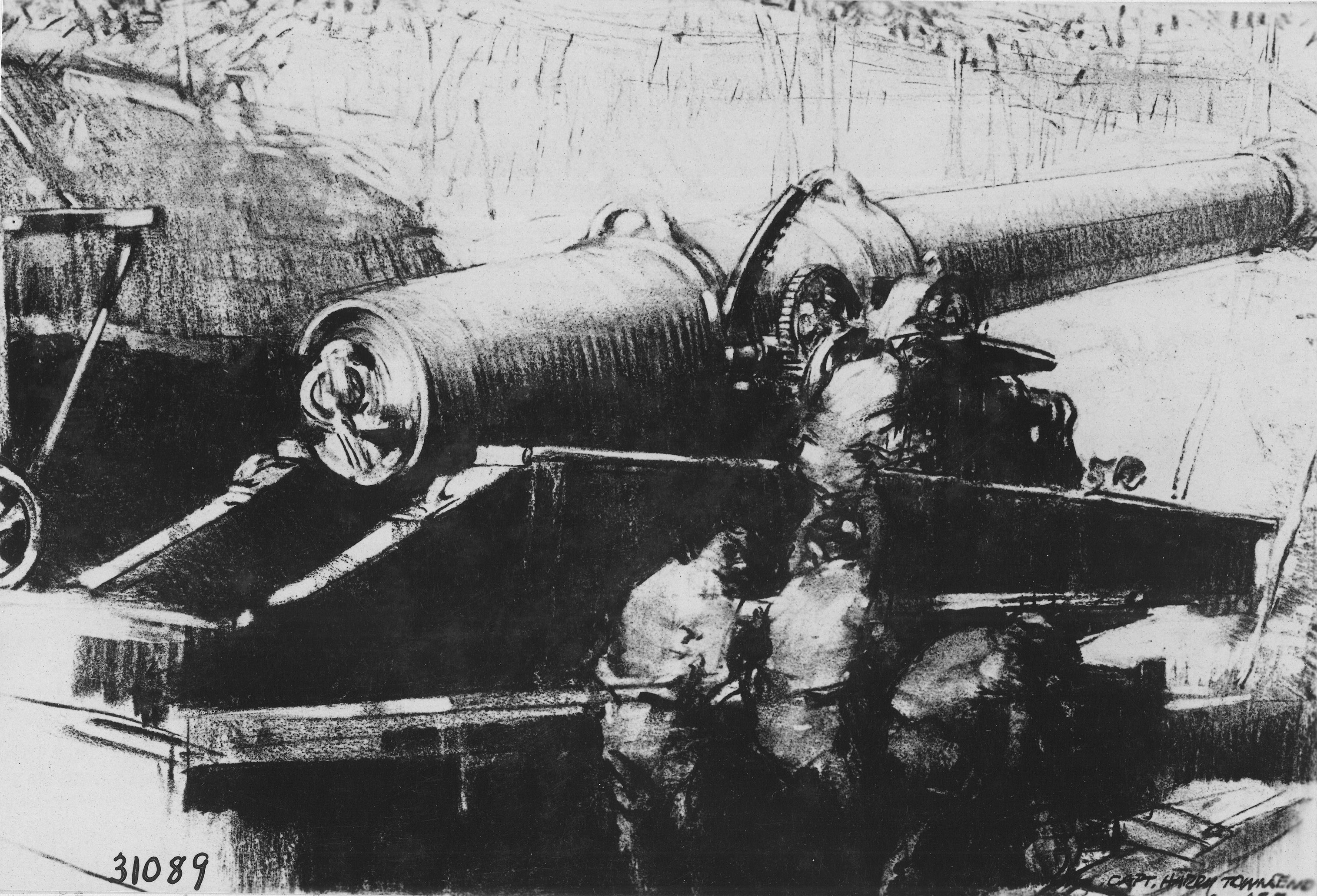 The topography in Belgium and France changed. Small towns in France, such as Fliery, Lucy le Bocage and Fleury were blown out of existence.  Today they are little more than sign posts off the highway. In the case of Fleury the shattered walls of a church and a few scattered headstones are all that mark where the town once flourished.  Artillery leveled hills and mines gouged craters that still remain in France and Belgium. 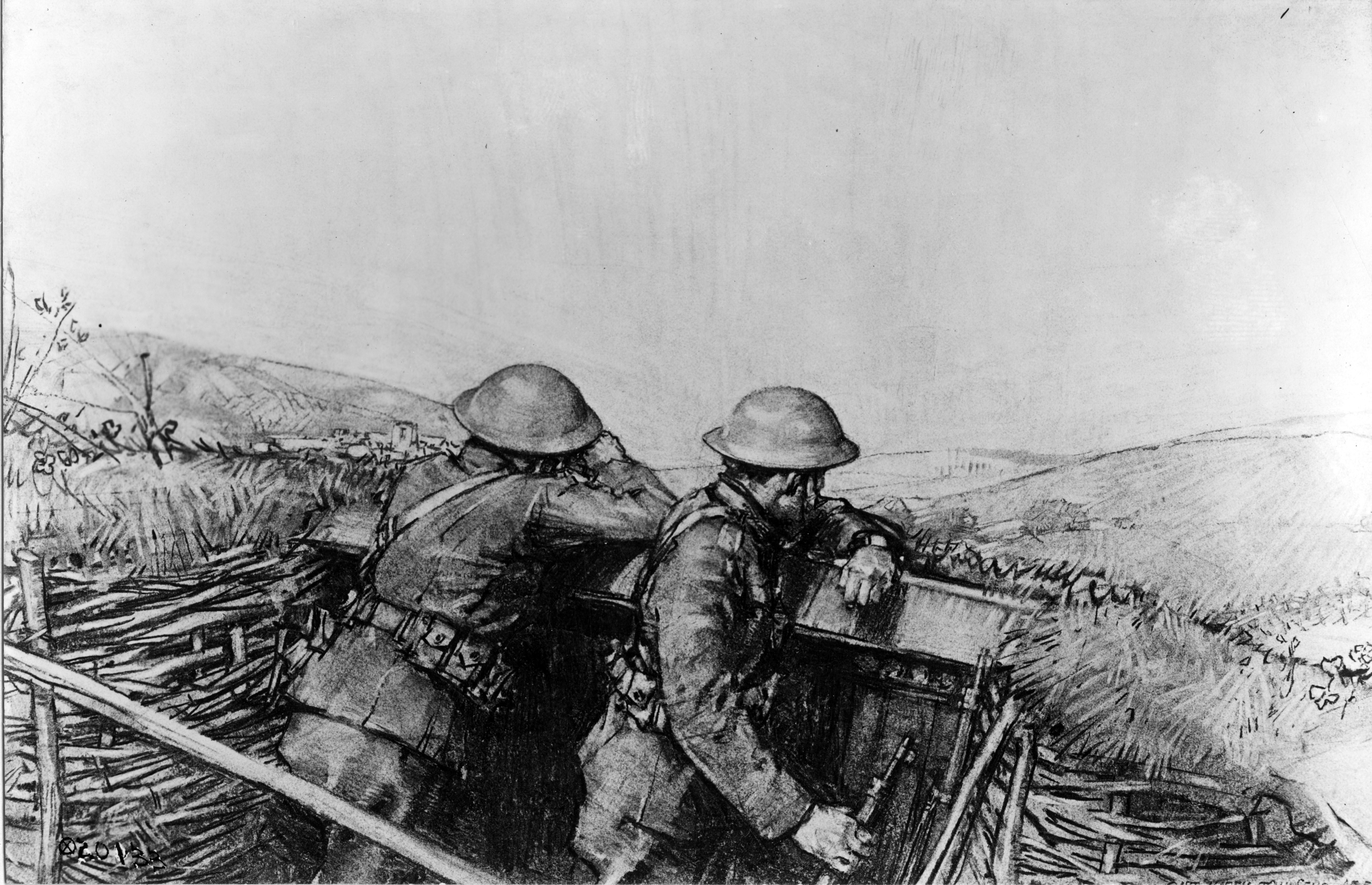 Local Identifier: 111-SC-20133: A Quiet Sector in Lorraine, Opposite Domevre.

The geography of Europe changed as the map was redrawn after the war.  Gone were German and Austro-Hungarian Empires. Monarchies fell; the Tsar was murdered, the Kaiser ousted; the Ottoman Empire eliminated.

Few parts of the world were untouched by the Great War. This was no longer a matter of France and Germany shooting at each other. The British Empire pulled in soldiers from Australia, New Zealand, Canada, and India into the conflict.  The Middle East was not spared. Conflict was brought to Arab countries.  With the end of the Ottoman Empire, the boundaries of countries in North Africa were redrawn and new ruling families installed by the victors of the Great War.  The United States which in 1914 had no intention of participating in the war, was eventually drawn in and emerged in 1918 as an international power. 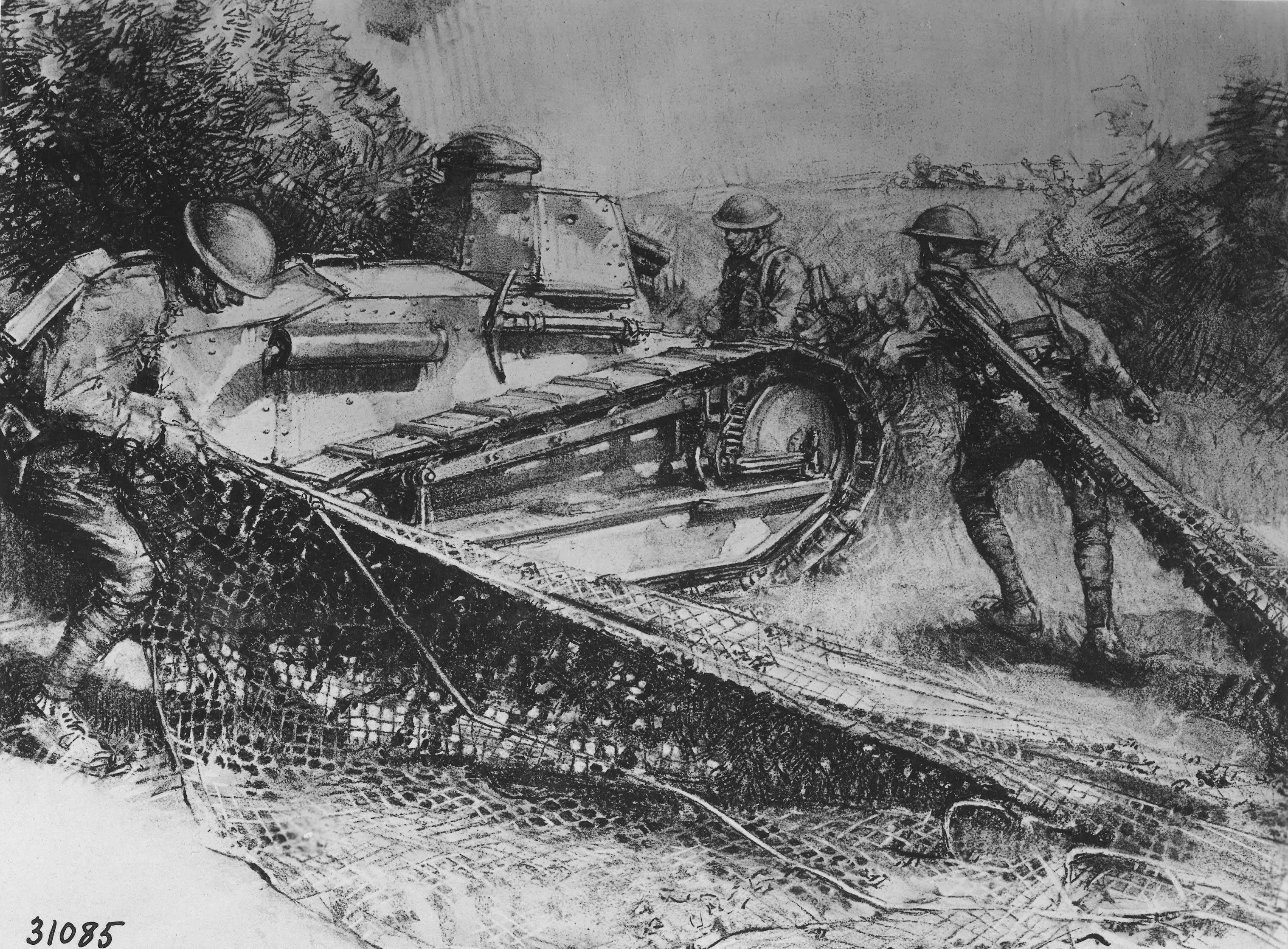 Local Identifier: 111-SC-31085 Camouflaging a Light Tank under Observation in the Field

The war ground to a halt in November 1918, four years after men marched to meet the enemy in August with the promise and expectation that the war would be over before the fall; then by Christmas; then by next year; then by the following year. The war stopped, but didn’t end in 1918. It started again in 1939 and finally ended in 1945 when the Allies defeated Germany and Japan in World War II. 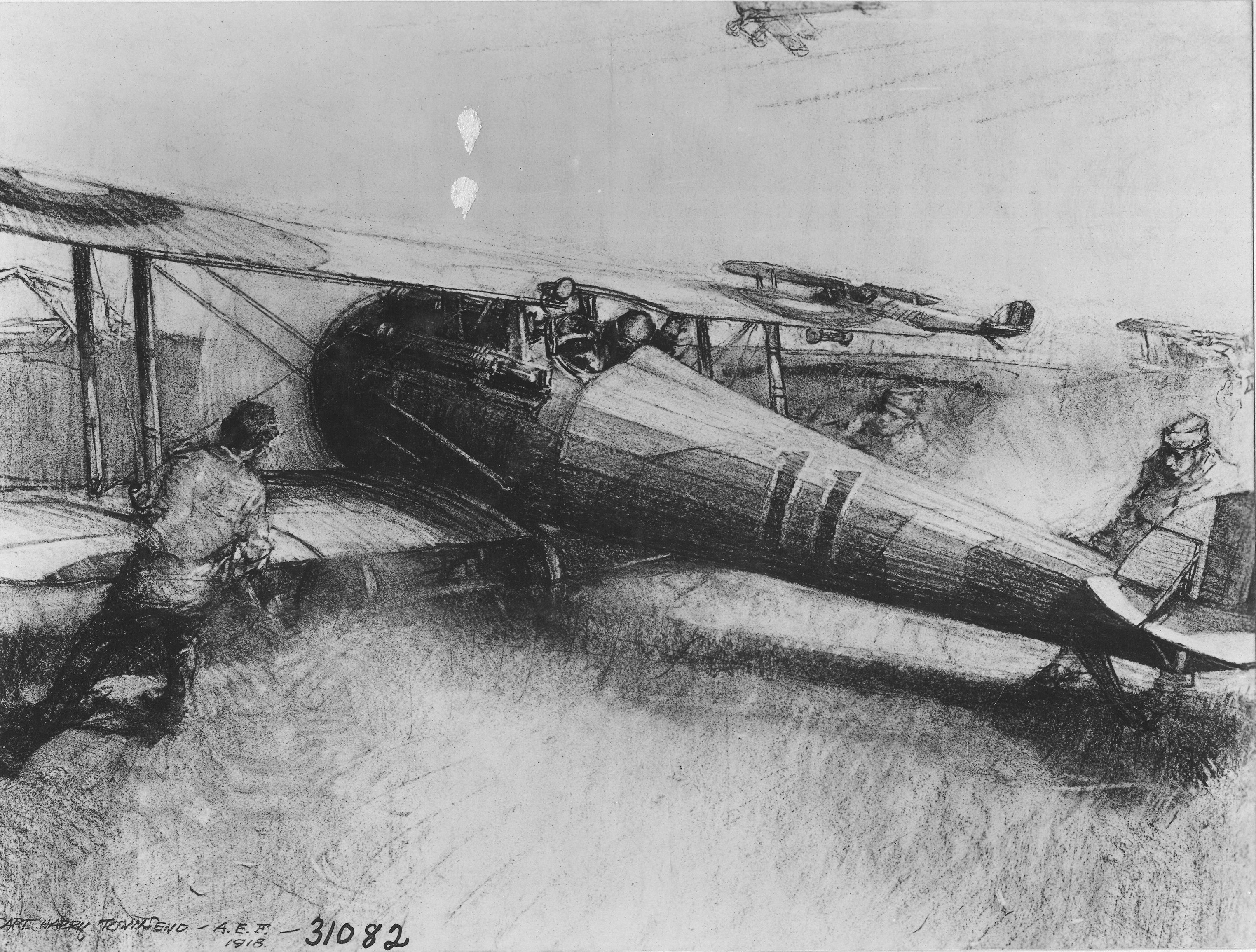 I’d like to acknowledge John D. Eisenhower and Byron Farwell for their comprehensive accounts of the battles of WWI and special thanks to Peter Krass for his in-depth examination of the artists and their experiences in WWI in Portrait of War.

The National Archives has custody of the original records of the combat divisions of the American Expeditionary Forces (Record Group 120) and the information contained in them is rich in detail.

More World War I Combat Art can be found online at the Smithsonian website: http://americanhistory.si.edu/collections/subjects/military?edan_start=0&edan_fq=topic%3A%22Combat+Art%22

Krass, Peter. Portrait of War: The U. S. Army’s Combat Artists and the Doughboys Experience in World War I. John Wiley and Sons.  New York. 2006.

One thought on “World War I Combat Artists – Harry Townsend”