Last July, while completing a training rotation in the Motion Picture Preservation Lab, I was tasked with inspecting the condition of film. Inspections are a basic operation the lab performs to ensure film holdings are properly handled and maintained. After spending most of my time with black and white film, I was excited when asked to inspect color footage.  A shot of Mount Vernon immediately caught my attention followed by the Washington Monument surrounded by cherry blossoms. I wanted to know more about the film, its subject matter and purpose. So, making note of the film’s identifying number, I set out to locate its production file. 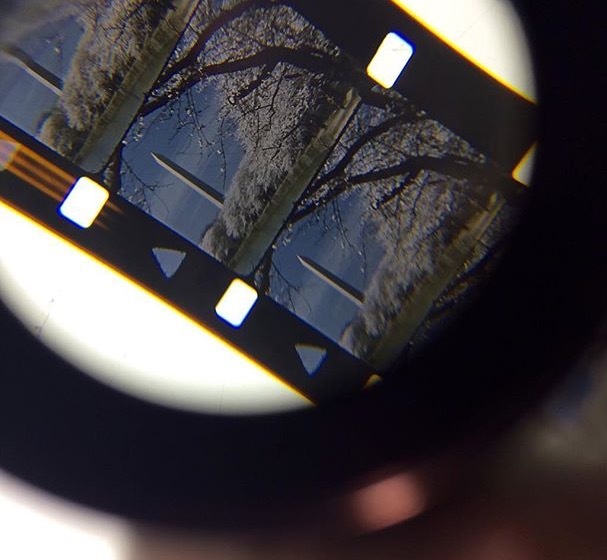 Washington Monument and Cherry Blossoms, seen in frames of motion picture film through a film loupe

The film I had been inspecting was a silent film titled Youth Visits Our Nation’s Capital. It was produced in 1939 by the Division of Information of the National Youth Administration (NYA).  The NYA was established in the Works Progress Administration (WPA) by Executive Order on June 26, 1935.  This government organization provided work training for unemployed youth and part-time employment for needy students between the ages of 16 and 25. It operated at varying locations across the United States until it was abolished on July 12, 1943 as the demand for war-related industry grew.

Films produced by the NYA document employment training and special events of its members. The series consists of 36 films, some in color and some black and white, both silent and with sound.  Some titles are: NYA Goes to College; South Charleston, West Virginia; Youth Also Serves; Youth, Jobs and Defense and Girls of El Capitan. A brief description of each film is included in the production files and can be seen below.

Youth Visits Our Nation’s Capital is comprised of two 16 mm reels. The film follows three NYA members as they visit some of Washington D.C.’s most iconic venues during the spring of 1939. The youth start their day at the Washington Office of the National Youth Administration where they are given an itinerary. Pennsylvania Avenue is the next stop with a view of the Capitol, the Supreme Court, and the Library of Congress. The NYA members then visit the Botanical Garden, Ford’s Theater and the White House.

No trip to D.C. is complete without a visit to the National Mall and the Washington and Lincoln Monuments, which is next for the trio. Rock Creek Cemetery and the well-known Adams Memorial “Grief” comes into focus next, after a trip on the city bus. This is followed by shots of the National Archives Building, Constitution Avenue and the Smithsonian Institution National Museum of Natural History. The Daughters of the American Revolution building, the American Red Cross building and Arlington National Cemetery are the next stops for the NYA members. Reel 1 ends with footage of George Washington’s Mount Vernon and his tomb.

The production file for Reel 2 is not included in the documentation for the film. This reel starts out at the Department of Agriculture with shots of female and male scientists conducting experiments and testing recipes. Various projects of the National Youth Administration are shown next, including the restoration of Alexandria Academy in Georgetown. Footage of Washington D.C.’s numerous spring activities finish the film. Views of blooming cherry blossoms introduce the crowning of the Cherry Blossom Queen and Queen Shenandoah of the Apple Blossom Festival. Eleanor Roosevelt makes an appearance at the White House Easter Egg Roll to close out the footage.