In honor of Veterans Day and in conjunction with the opening of the National Archives’ newest exhibit, “Remembering Vietnam,” we’re highlighting some of NARA’s Vietnam era film footage. You can read more about the exhibit here and here. If you would like to conduct research relating to the Vietnam War, NARA has created a portal accessible here.

The Vietnam war brought the front lines of combat to America often mere hours after events occurred creating an increased need for film footage. The images broadcast in America’s living rooms during the war were often captured by military combat photographers. The increased demand for footage was answered by both private sector journalists and the United States government. The military increased their production of photographs and moving images and because of this, NARA’s motion picture holdings relating to the Vietnam war are quite expansive. Included in the collection are training films, news releases, combat documentation, footage documenting the return of prisoners of war and Medal of Honor ceremonies.

Produced by the United States Air Force in 1968, this film explores the role and importance of Air Force combat camera crews in Vietnam. Footage shows members of the 600th Photo Squadron jumping into combat zones and riding along on chopper missions. It also details day-to-day job related activities such as film editing.

Ceremonies and special events were also captured by military camera crews at home and abroad. This film, from the series Motion Picture Films from the Army Library Copy Collection found in Record Group 111, captures the Medal of Honor ceremony of SP/6 Lawrence Joel. Joel received the Silver Star and Medal of Honor while was serving as a medic attached to the 1st Battalion of the 503rd Infantry Regiment in the 173rd Airborne Brigade. On November 8, 1965, the battalion of paratroopers and Joel were on a patrol near Bien Hoa in War Zone “D” conducting Operation Hump when they were ambushed and outnumbered by Viet Cong forces. Even after being wounded, Joel continued performing his duties during the twenty four hour firefight. He was presented with the Medal of Honor by President Johnson in March of 1967.

Wild sound- The audio for this film is an example of wild sound.  The recorded audio is not synchronized with the film footage.  Sometimes the audio was meant to be inserted into the film post-production. Our film lab was able to sync the wild sound captured during President Johnson’s speech to the film footage above.
Below is silent footage of the entire event.

The Big Picture: Your Army Reports

A portion of our Vietnam-related content consists of unedited footage of maneuvers and battle. These films provide important documentation for those studying Vietnam. The following films are excellent examples of this. The first two are from the series Army Pictorial Center Motion Picture Films, in Record Group 342: Records of U.S. Air force Commands, Activities, and Organizations, 1900-2003. 342-APCCLI-7 and 342-APCCLI-10, were shot by cameras affixed to helicopters and capture the dropping of napalm and phosphorus as well as strafing. The third film, 111-DD-317-7, is found in the series Filmed News Releases in Record Group 111: Records of the Office of the Chief Signal Officer, 1860-1985. Titled U.S. Army’s 1st Air Cavalry Division Conducts Massive Air Assault in South Vietnam, it was shot by a military cameraman and follows the 1st Air Cavalry on an air assault mission near the South China Sea.

Textual documents such as production files or agency created indexes sometimes accompany films in our holdings. In the case of these three films, the military provided card catalogs and press releases containing important information about the film. You can view these documents below. 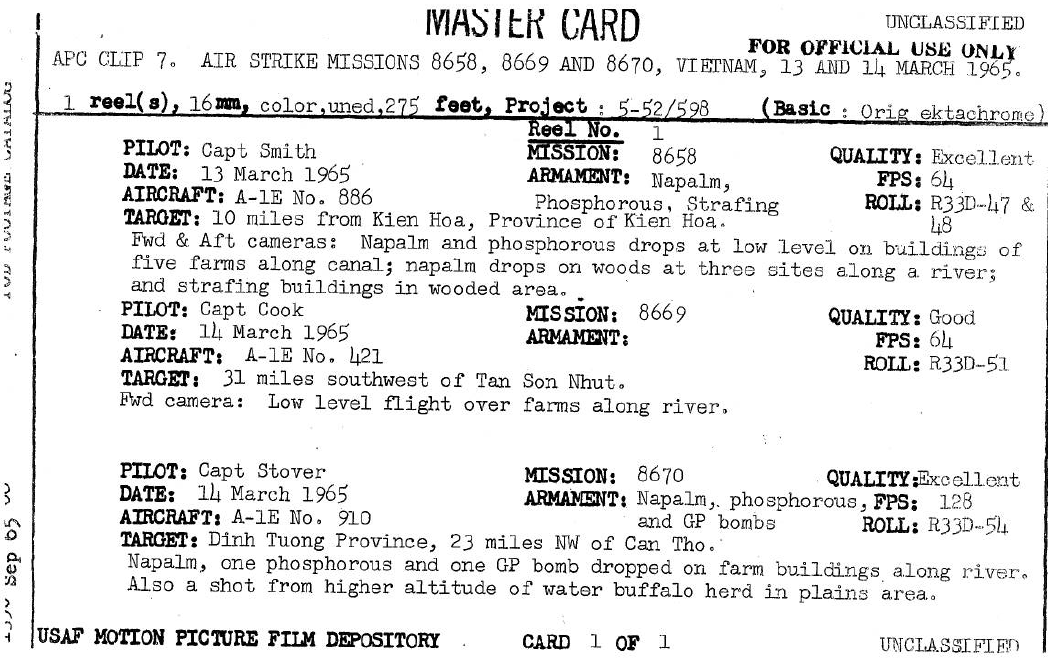 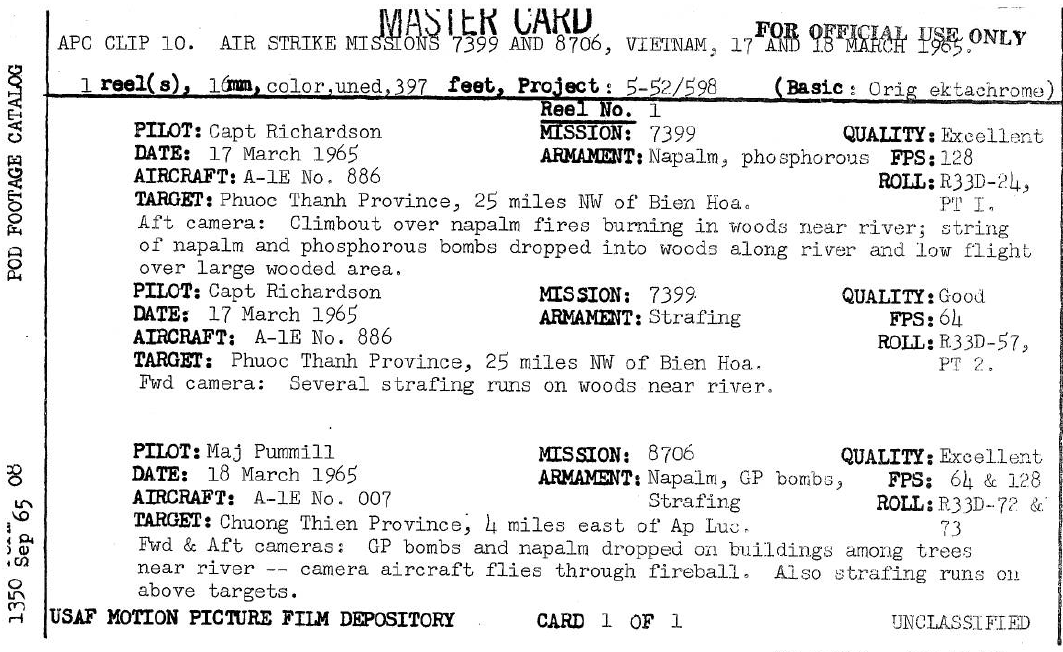 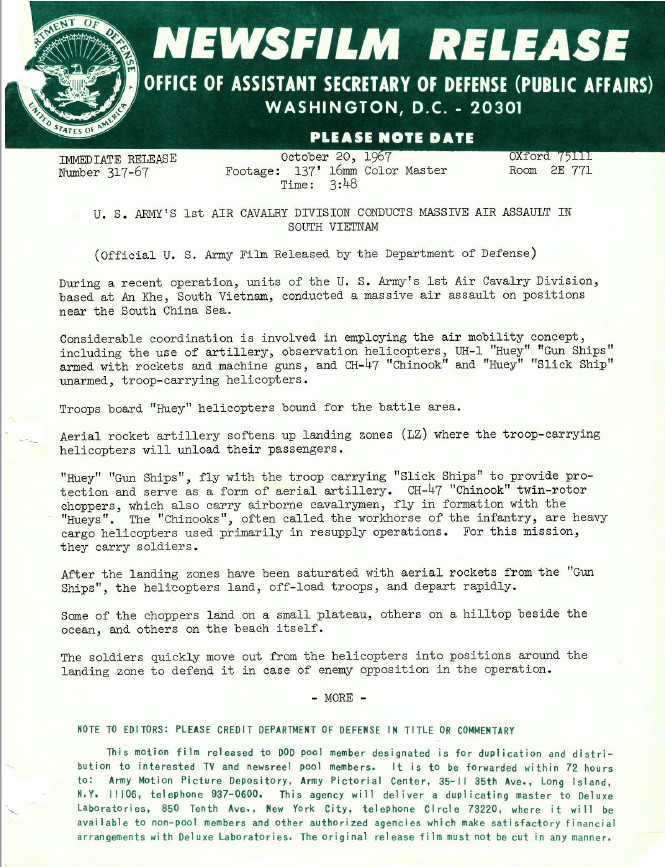 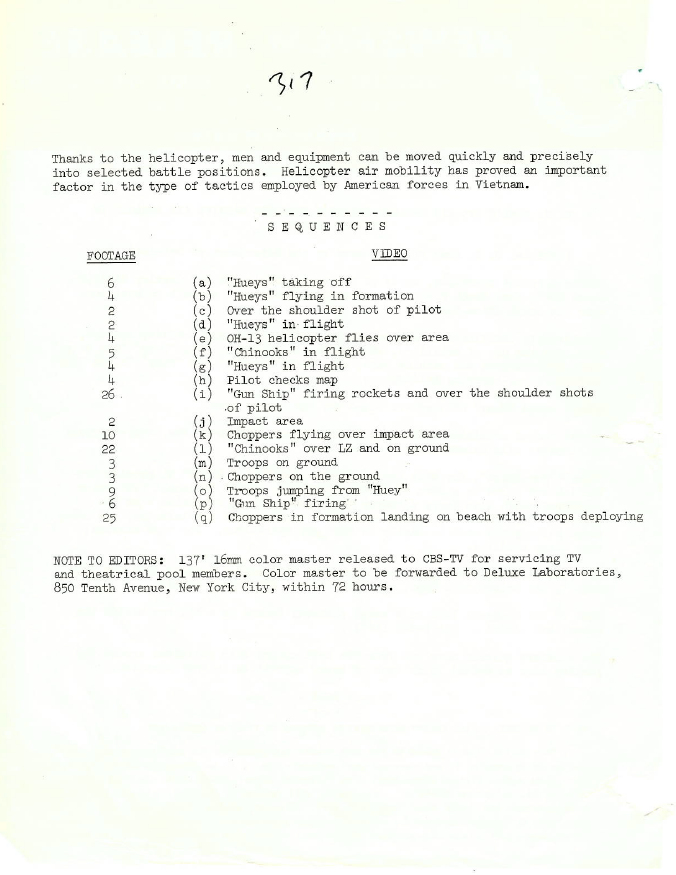 The following footage, found in the series: Photo Service Moving Images, Record Group 342: Records of U.S. Air Force Commands, Activities, and Organizations, 1900-2003, shows the return of POW’s who were detained at the Hoa Lo Prison, also known as the Hanoi Hilton. As is the case here, sometimes we come across footage containing well known individuals. Senator John McCain  is among the former POW’s in this footage and can be seen at the 9:35 mark. McCain spent over five years as a POW after being shot down while on a bombing mission over Hanoi in October 1967. A full list of the POW’s in this footage can be found on the description cards below.

4 thoughts on “Remembering the Vietnam War this Veterans Day”