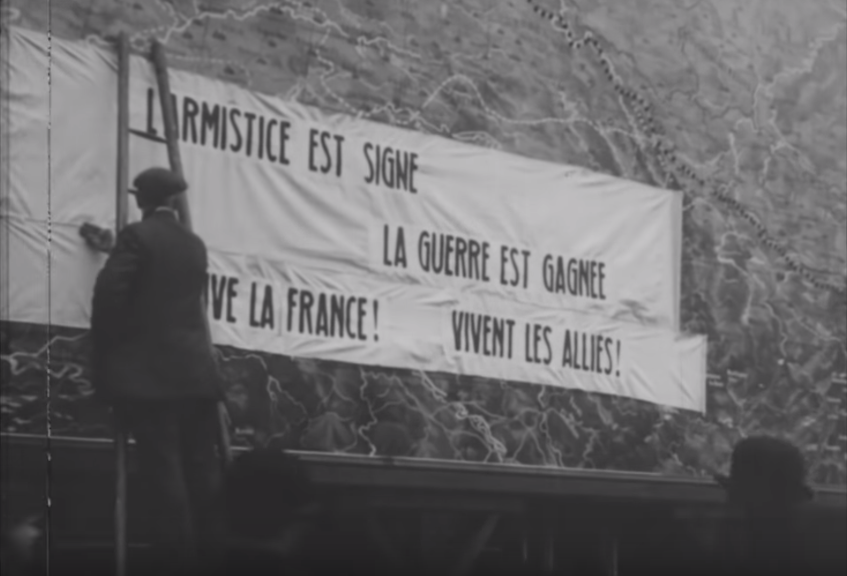 This Veterans Day, November 11th, is the 100th anniversary of the armistice of World War I. The armistice was not an official surrender by Germany, which would come several months later with the signing of the Treaty of Versailles, but was essentially the beginning of the end of the war.

The Great War, as it is also known, forever changed the look of warfare, costing more money and killing more people than any other previous war. It is well known that the guns of World War I fell silent at the 11th hour on the 11th day of the 11th month of 1918, but what was the unofficial end like for those on the front lines experiencing it?

Some of their reactions were captured on film by the United States Signal corps. These films now make up part of the 111 record group Records of the Office of the Chief Signal Officer. In conjunction with the 100th anniversary of World War I and with the funding of an anonymous donor, the National Archives has been able to digitize over 110,000 photographs and over 400 reels of film relating to WWI.

Films from record group 111 cover the armistice, capturing how troops on the front lines heard about the ceasefire, their reactions, as well as the reactions of citizens of both Europe and America. Other footage shows the withdraw of German troops, the signing of the Peace Treaty of Versailles, and memorial services held at Arlington National Cemetery in 1920.

On the Front Lines

Soldiers on the front lines, oftentimes engaged in battle hours before, heard about the war’s end through orders such as the one below which is shown in the film 111-H-1233. It reads, “The following message received from Headquarters 2nd Army: Armistice signed. Effective 11th hour 11th November, at or before which time all hostilities and advance must cease. … No communication will be had with the enemy.” This film also shows the gun that fired the last shot in the sector and burial of one of the last dud shells fired by Germans. 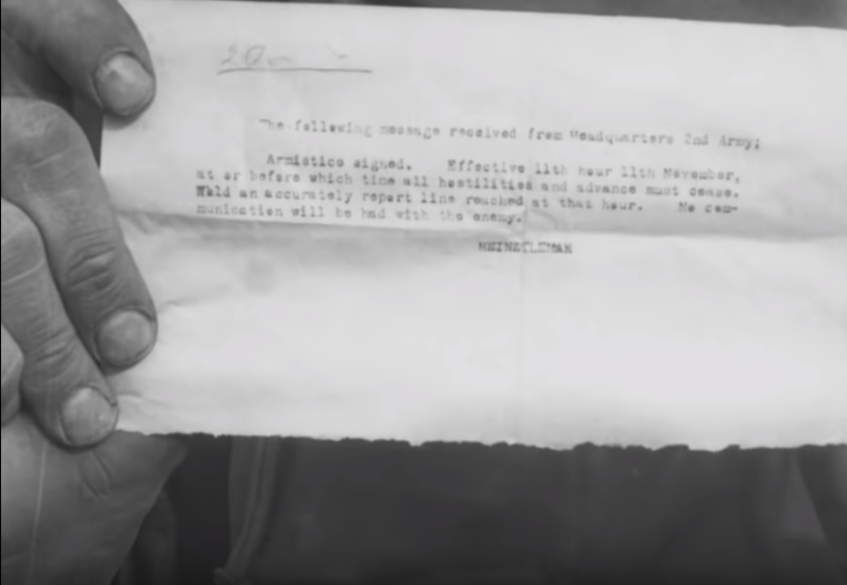 Withdraw of the German Army

The below film was shot in Luxembourg on November 21, 1918 and captures the withdraw of the German 42nd Division which had seen action on the Western and Eastern Front during the span of the war.

The Peace Treaty of Versailles

The Peace Treaty of Versailles was signed in June of 1919 in Versailles exactly five years after the assassination of Archduke Franz Ferdinand, an event seen as the tipping point for the beginning of World War I. The film included below, 111-H-1243, shows the arrival of several delegates including President Wilson as well as the signing of the document.

Memorial Services After the War

A well known area of Arlington National Cemetery is its Memorial Amphitheater and Tomb of the Unknown Soldier. The current Memorial Amphitheater replaced an older, wooden one which was near Arlington House. The film 111-H-1248 documents the last memorial services held in the old Amphitheater and the dedication of the new one. In attendance were veterans of the Civil War, Spanish-American War, and World War I. Also included in this film are early images of the Tomb of the Unknown Soldier and a wreath laying ceremony conducted there on what is described as Lincoln Day.

The 111-H collection contains detailed shot lists, a majority of which can be accessed in our online catalog thanks to recent digitization. Shot lists are extremely helpful when screening footage, as they may contain details including date and location, ship names, regiment and unit numbers, and sometimes even solders’ names. These files and the films they accompany make this series a vital resource for researchers.

“Our Wings of Victory,” the Manufacture of Military Aeroplanes During WWI

Accessing World War I Photos in the Digital Age

Maps of the Great War: Army Cartography in World War I

Shooting World War I: The History of the Army Signal Corps Cameramen, 1917-1918