This post was co-written with Ashley Behringer and Amy Edwards.

We’ve been offline since saying goodbye to Seattle on Thursday, busy exploring the mountains and high desert of the Northwest, then dropping South to Yellowstone National Park. Fans of the Unwritten Record may recall posts featuring Yellowstone from across Special Media, including Yellowstone in Kodacolor , Still Photography for Yellowstone’s Birthday, and Master Plans of the National Parks.

Today we’re planning to cross the Continental Divide, from which all waters flow West to the Pacific or East to the Atlantic. We are looking for the pass crossed by the First Transcontinental Motor Convoy one hundred years ago, in August 1919.  This mighty convoy of 81 Army vehicles had set out from Washington, D.C. a month earlier on a road trip following the Lincoln Highway to San Francisco. Their goals: to test how American roads and bridges would hold up if a force were mobilized in the United States, and to gauge the performance of their fleet, which included Mack trucks, a G.M.C. ambulance, Harley-Davidson motorcycles, and a Trailmobile kitchen. Footage and photos from the journey can be found among the Records of the Office of the Chief Signal Officer in Record Group 111. The Signal Corps original shot list accompanies the footage and a daily log is also available.

According to the shot list, the convoy crossed the Continental Divide on August 11, 1919 at 8020′ just west of Laramie, Wyoming, near a Monument to Oakes and Oliver Ames, builders of the Union Pacific Railroad. You can see the monument in the distance at 10:45.  at 8020′– perhaps second crossing)

After stopping for chow and few photographs, the convoy got back on the road.

Other events from the log appear in the film, including the July 22 incident in which “Riker #415009 turned turtle in ditch” at 3:35 in the film. The famous Trailmobile kitchen appears at 16:39, though it would soon overturn and sadly perish on a hillside in Nevada. And at 23:56, the convoy is in the final stretch, as trucks board the ferry from Oakland to San Francisco – Emperor Norton’s dream of a bridge had not yet come to fruition. After 3,251 very eventful miles, the convoy arrived in San Francisco on September 6.

Next Stop: Badlands with Amy Edwards

Located in the southwestern territory of South Dakota, the national park covers 242,756 acres and is co-managed by the National Park Service and the Oglala Lakota Tribe.  Originally established as a national monument in 1939, the Badlands was officially named a national park in 1978. 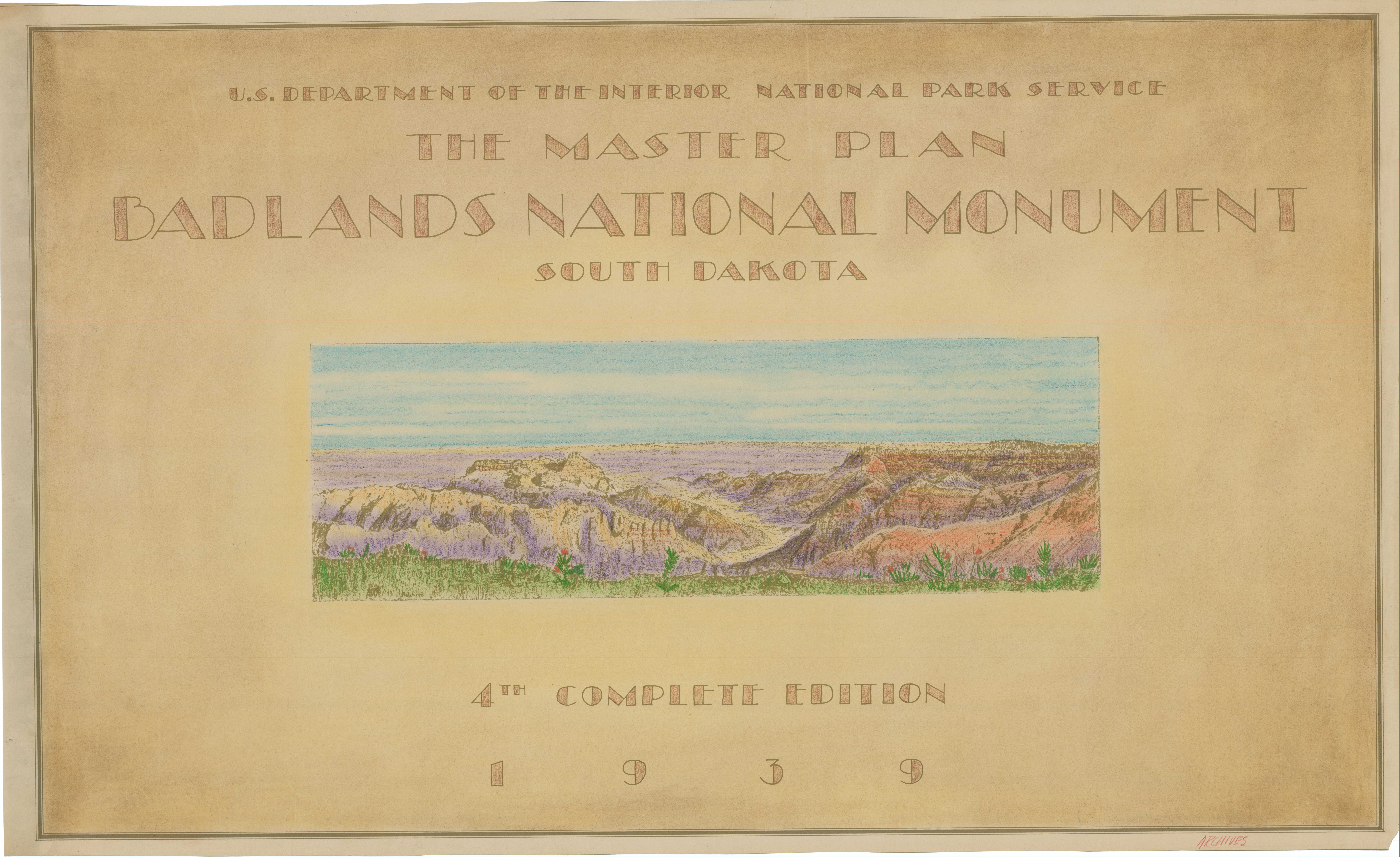 Based on information outlined in the Badlands National Monument South Dakota Development Outline, the area was initially only thought of as an interesting driving route that led to Yellowstone, Teton, and Glacier National Parks.  It was even assumed that “camping, as such, will never be satisfactory in this area and no provision will be made for this facility”.  Interestingly, the developers from the 1930s were incorrect in their original assessment of the value of the Badlands.  There are currently two main campgrounds and many backcountry camping sites in the park and the Badlands frequently makes the list of “Most Popular Parks” for hiking, camping, scenery, and wildlife.

The name “Badlands” comes from the original name “Mako Sica”, meaning “land bad” by the Lakota.  Savaged by erosion over millions of years, this landscape is now composed of a breathtaking collection of spires, buttes, mesas, and gorges in a variety of rainbow hues.  Among the variety of colors on display in places that have been eroded, one can observe white volcanic ash, red and reddish orange iron oxide, yellow and purple shale deposits, and tan sand.

According to the National Park Service, the Badlands is currently home to thirty-nine species of mammals including bison, mule deer, white-tailed deer, Rocky Mountain bighorn sheep, pronghorn, badgers, bobcats, coyotes, swift foxes, black-footed ferrets.  In addition to all the mammal species, there are also nine species of reptile, six species of amphibian, 206 different types of birds, and sixty-nine unique butterflies.  But, if you think that all of that is impressive, let’s step back in time a few million years, specifically 65 to 76 million years ago when the wildlife was, in some ways, similar but in other ways, very, very different.  Familiar to us would be animals resembling modern-day horses, rabbits, antelopes, and beavers, while on the more exotic and less familiar side, we might see camels, rhinoceros, a small sabre-toothed cat, and a tiger-like animal.  While mammals are well-represented here, it is interesting to note that the rock formations in the Badlands are not generally old enough to contain dinosaur fossils.

On a personal note, as I sit down to write about this location, I couldn’t help but smile because it reminds me of one of my all-time favorite summer movies.  Released on June 11th, 1993, the opening scenes of “Jurassic Park” supposedly takes place in the Badlands, where the two main characters, Dr. Grant and Dr. Sadler have just unearthed a very cool dinosaur that we would all come to know (and, maybe, love) as a “Velociraptor”.  Pure fiction, but pure fun, nonetheless!

One thought on “Summer Road Trip: Across the Great Divide and into the Badlands”