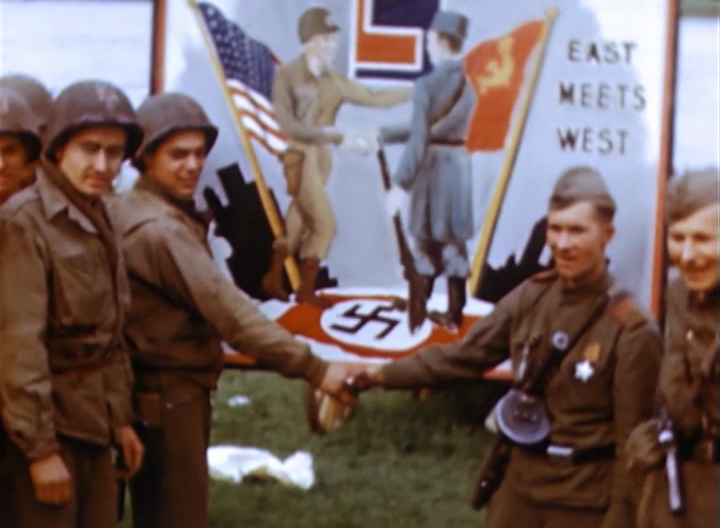 The Germany city of Torgau is located on the banks of the Elbe River just 100 miles from the county’s capital of Berlin. It is there that American and Soviet forces met on April 25, 1945 marking the end of World War II in Germany. Twelve days later, on May 7, 1945,  General Alfred Jodl, representing Nazi Germany’s top leaders, signed the first Instrument of Surrender unconditionally surrendering all German military forces the following day, May 8.

Those involved with the meeting at Torgau celebrated for several days following initial contact. Ceremonies were planned and carried out, soldiers met and exchanged pleasantries, and a party was hosted by Soviet soldiers. Most of these celebrations were captured by American soldiers on color motion picture film now in our holdings at the National Archives. Below are several clips taken from this footage as well as the original description from each film’s shot list.

Description and format taken directly from shot card: “Individual shots of Russian women and men soldiers. A banner stretched across street in American and Russian, reading: LONG LIVE THE VICTORY OF THE ALLIANCE OF AMERICA, ENGLAND AND THE SOVIET UNION OVER THE GERMANS – FASCIST OCCUPANTS”

Description taken directly from shot card: “Russians and Americans dancing before pictures of Stalin and Roosevelt – the Russians doing their native dance.”

These images stand out from other footage documenting the end of World War II not only because it is in color but also because it shows female Soviet solders. Women in the Soviet Armed Forces numbered close to 1 million and served as paramedics, surgeons, doctors, nurses, fighter pilots, tank crew members, infantrymen, antiaircraft gunners, and snipers. They played a vital role in the Soviet Armed Forces, contributing greatly to the success of the Allied powers.

After the Allied meeting at Torgau and the formal surrender of Nazi Germany on May 8, 1945, citizens in countries all over the world celebrated what is now known as Victory in Europe Day or VE Day. In Paris, a city previously occupied by the Germans, citizens celebrated with parades, parties, and festive attire. The celebrations in Paris were documented by American military cameramen stationed in the city. According to the shot list for this footage, it was filmed on May 8th around the city at the Champs-Elysees, Arc de Triomphe and “the Paris opera house.”

While VE Day did not mean a total end to World War II, the surrender of Nazi Germany meant the Allies no longer had to fight a two-front war, and could focus solely on the Pacific Theater. VE Day also provided Europeans with a chance to mark the end of the war before beginning the process of rebuilding their homes, cities, and countries. You can read more about post-WWII recovery as it relates to our records in these blog posts: Photographs Relating to the Marshall Plan and post-WWII Economic Recovery in France and Dreaming in Technicolor: “The Shoemaker and the Hatter”. 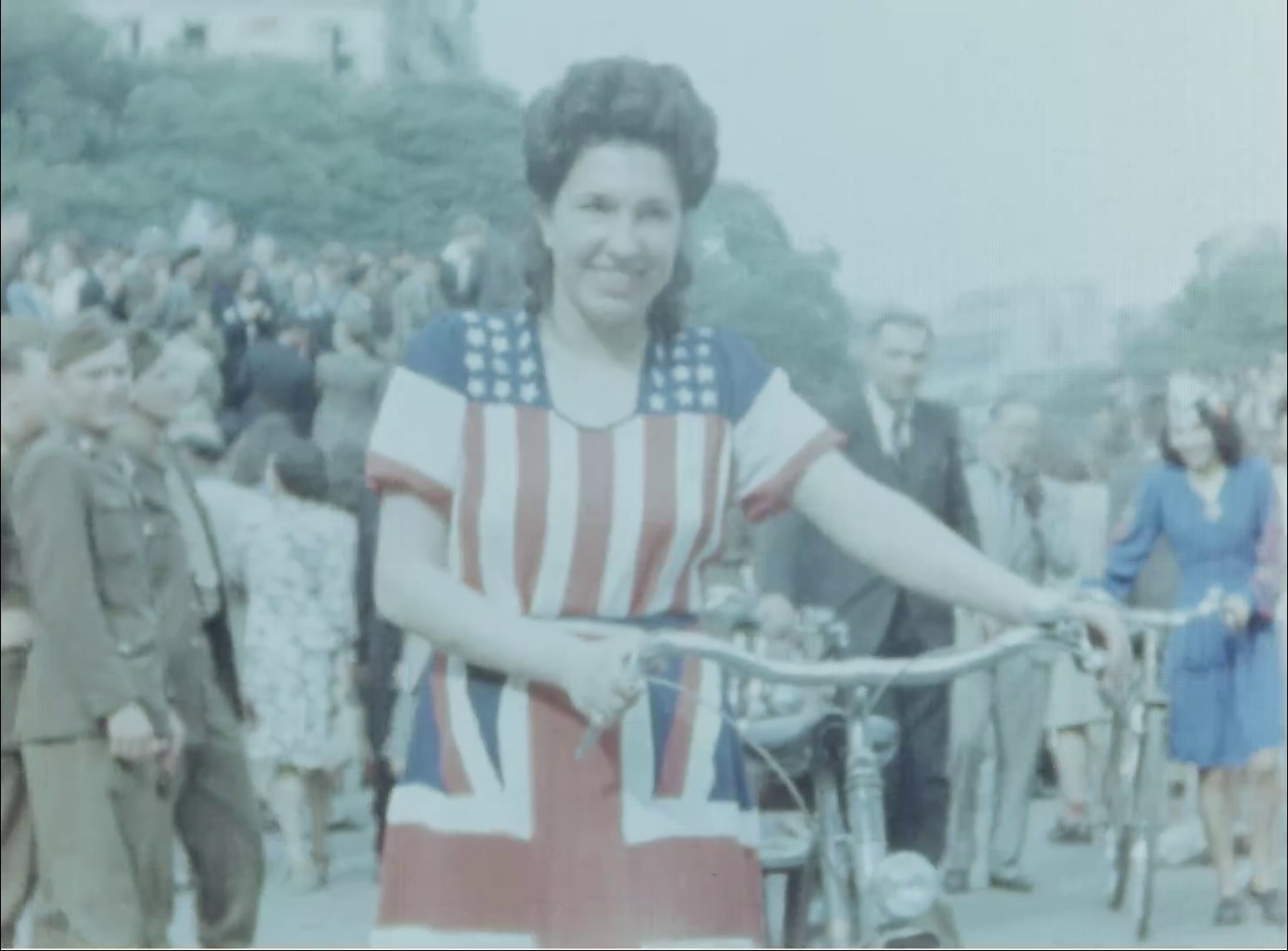 All of footage included in this post can be found in Record Group 18: Records of the Army Air Forces and series SFP: Motion Picture Films from the “Special Film Project” Program Series. The film capturing the meeting at Torgau can be viewed in its entirety in our catalog here: 18-sfp-9149. More documents pertaing the meeting at Torgau and the surrender of Nazi Germany can be found in our catalog at the links below.