The series document a range of NOAA surveys and projects, including documentation of an emergency response drill in the Florida Keys National Marine Sanctuary, images of the shipwreck site of the USS Monitor, documentation of NOAA research expeditions and missions to the Lost City Hydrothermal Fields in the Atlantic Ocean, and NOAA research expeditions to the northwestern Hawaiian Islands and the Channel Island National Marine Sanctuary.

Footage also includes camera originals used in the making of two NOAA-produced documentaries. “The Surveyors: Charting America’s Course”, which commemorates  the 200th anniversary in 2007 of NOAA and its predecessor agencies,   and  “People of the Seal”, a documentary about the history, legacy of the Unangan native people of Alaska’s Pribilof and Aleutian Islands, the relationship between the Unangan and the northern fur seal, and of NOAA’s restoration and environmental remediation efforts on the islands.

Most of the videos from these series are unedited, and were shot in the high definition video format. If you are interested in the technical specs, they were shot in 720p, or 720 progressive scan, with frame rates of both 24 and 60 frames per second, and recorded to DVCPro videotape.

Roughly speaking, 720p meaning that there are 720 lines of horizontal resolution in every frame of video, and the images are scanned progressively( (line 1,2,3,4, etc. through 720). In 1080i, or interlaced video, another high definition format, the image or frame is displayed as even lines, odd lines, over and over again.  As our colleague Courtney Egan explained ,  “this is a more traditional type of video formatting and display that has been used since the early days of broadcasting and that was originally used as a basic means of compression.”

This video, “Pribilof Islands Scenes”  is from the series “Unedited Video Recordings Used for “People of the Seal” :

Here are descriptions for the new NOAA series:

Search Tip: You can search on individual program titles for a series by clicking on “Search Within This Series” in the series Catalog record. 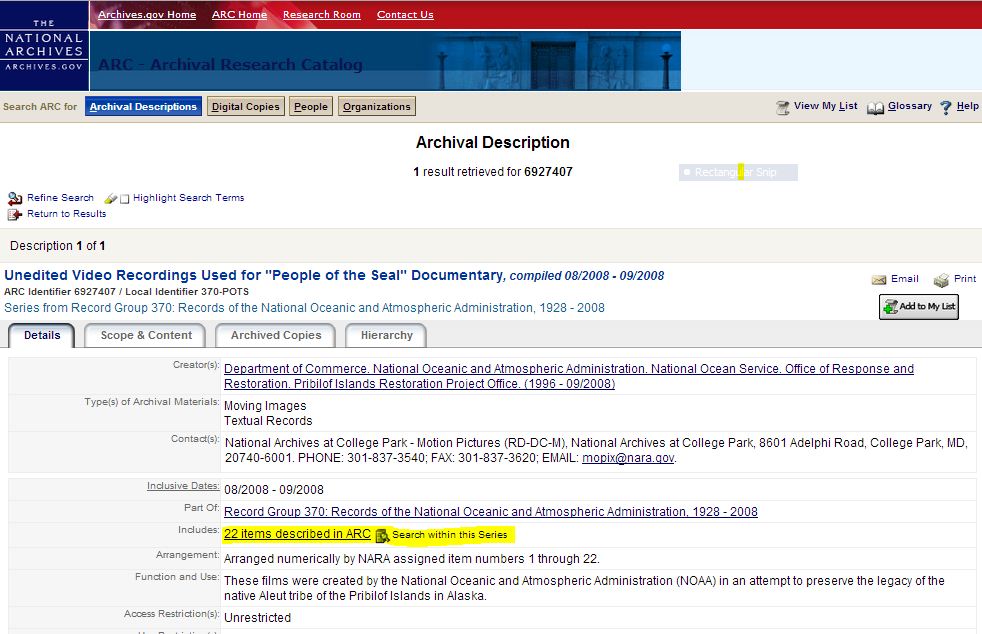