In August of 1946, a year after the end of World War II, the United States Navy mounted an expedition to Antarctica officially titled The United States Navy Antarctic Developments Program, 1946-1947. The mission, more commonly referred to as Operation Hi-jump, was organized by Rear Admiral Richard E. Byrd, Jr., USN (Ret) and led by Rear Admiral Richard H. Cruzen, USN, Commanding Officer. For Byrd, Hi-jump would be his fourth Antarctic expedition and was expected to last six to eight months. The primary goal of the mission was to establish an Antarctic research base, Little America IV.  The navy also spent time training personnel, testing equipment in the cold conditions, and determining the feasibility of establishing and maintaining bases in the Antarctic.

At the base Little American IV, sailors salute the American flag as it is raised.

The trip is well documented in NARA’s holdings with photographs, maps and charts, and film. NARA’s film holdings of Hi-jump include unedited footage shot by the Navy.  These films show what daily life was like for the soldiers while in Antarctica.  Included are images of base camp, their living and working quarters, equipment being tested, and use of a variety of transportation options including ships, airplanes, and sled dogs.

A sled dog used for moving supplies and human transportation while in Antarctica. 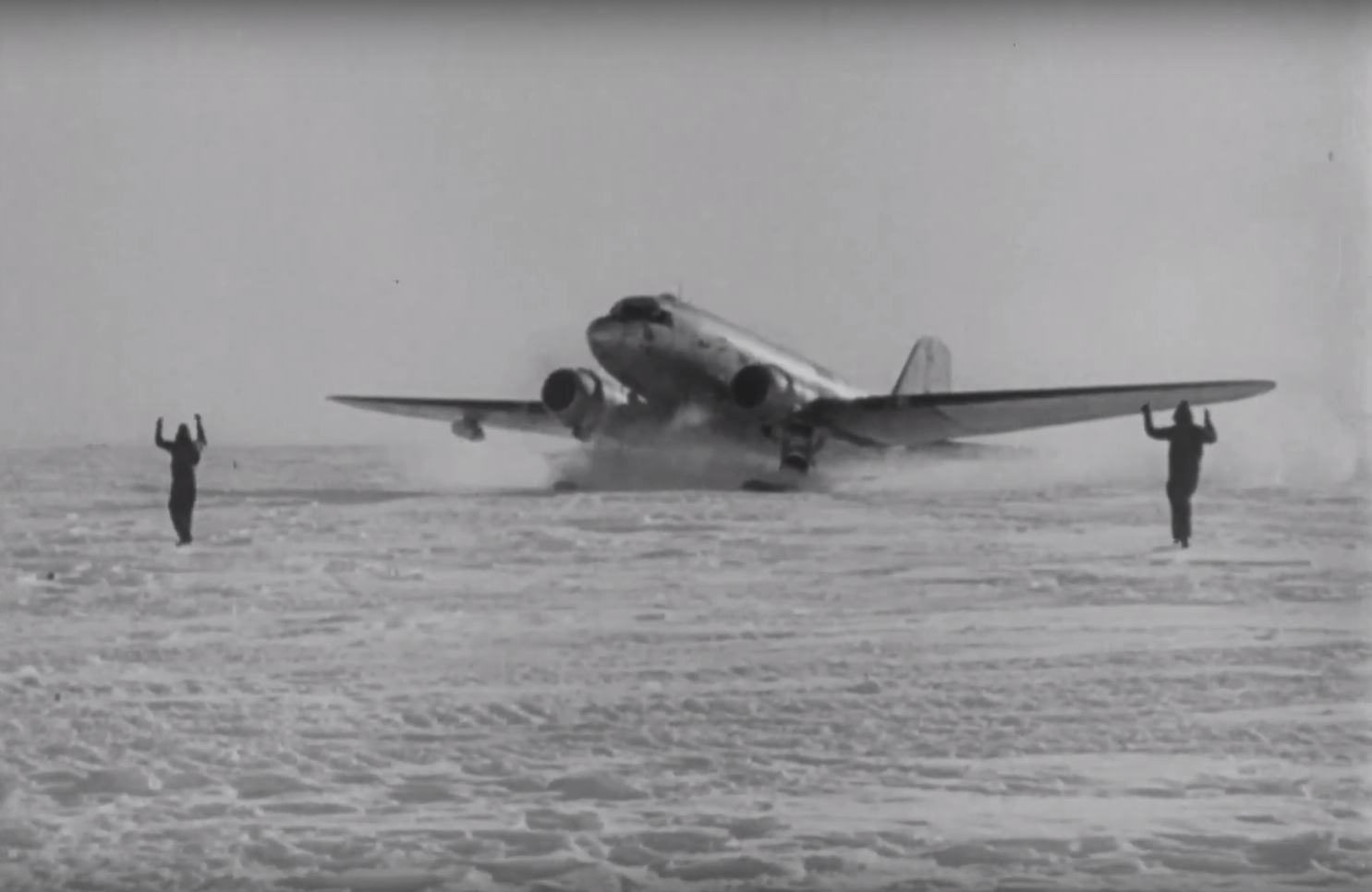 Landing airplanes on the frozen surface of Antarctica was part of Operation Hi-Jump’s mission to train personnel and test equipment.

The Navy’s unedited footage is also found in newsreel format in our Universal News collection. One newsreel highlights the start of Operation Hi-Jump with scenes captured at a variety of ports.  The second newsreel provides updates on Hi-Jump, discussing the work being done in Antarctica as well as harsh weather conditions and minor mishaps.

Almost all of the film footage relating to Operation Hi-Jump is black and white, with one exception. The color film relating to Hi-Jump doesn’t have footage of the polar regions. Instead, sites from around Washington D.C. can be seen. One of the most famous landmarks in the film is George Washington’s Mount Vernon. 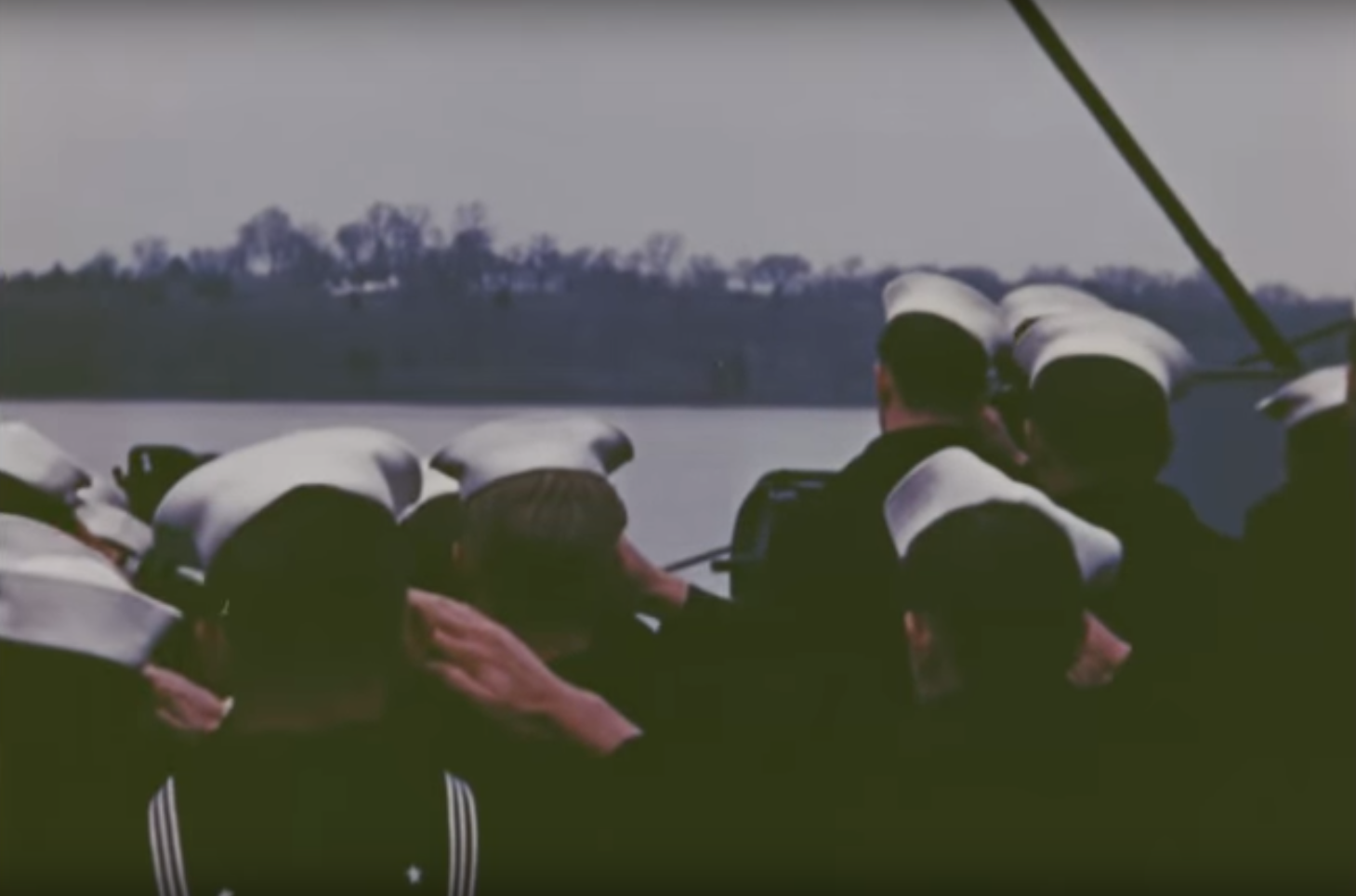 Paying tribune to George Washington by saluting his tomb at Mount Vernon is a Navy tradition.

This film was shot on board the USS Mount Olympus, the flagship for Operation Hi-Jump, as it returned to the United States. On December 2, 1946, the ship sailed from Norfolk, VA, reaching the Bay of Whales, New Zealand on January 16, 1947. A month later, the Mount Olympus detached from Operation Hi-Jump and set sail for Washington, D.C.’s Navy Yard.  The footage captures the ship making its way up the Potomac and Anacostia Rivers. Sailors can be seen enjoying some down time in the sun as well as paying tribute to George Washington and finally docking at the Navy Yard. Rear Admiral Byrd and Chief of Naval Operations Admiral Chester W. Nimitz can be seen toward the end of the footage during a ceremony.

The footage from all three of the films discussed can be viewed below. The descriptions of several more unedited films relating to Operation Hi-Jump can be found in the National Archives catalog.

One thought on “Operation Hi-jump: Exploring Antarctica with the U.S. Navy”